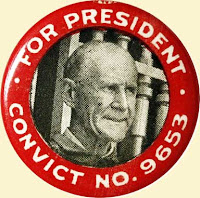 Eugene Debs won 6% of the vote when he was the Socialist Party candidate for president in 1916, and he still won 1% when he ran again, from Federal prison, in 1920.  For American socialists, it was downhill from there.  Although FDR appropriated some major chunks of the Debs platform in his response to the Great Depression, and although Americans ignored the "socialist" label when LBJ introduced Medicare, it took Bernie Sanders to make socialism almost respectable again.  Almost.  When it comes to selling a policy, what you call it still counts for a lot.

The main obstacle to universal Medicare, though, is that most people don't need it.  Most Americans have medical insurance through their employers, their benefits often are considerably better than those offered by Medicare, and they assume Medicare will be there for them when they retire.  How, then, can today's socialists garner popular support for national health insurance?

The simplest answer is to sell Medicare coverage to employers, in direct competition with private insurers.  Not required to turn a profit, Medicare can undercut private competitors; and as it grows, economies of scale would make it even more competitive.  The risk pool of Medicare's users would become younger and healthier, and the new cash flow would alleviate the problems of finance that Congress fails to address.  Mass enrollment also would create pressure to improve Medicare benefits, which currently are less than generous.

Posted by the view from vicworld at 1:26 AM No comments:

The Question of WHY 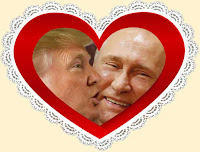 Some might think Our President's recent fiasco in Helsinki finally might penetrate some red caps and shake the fanatical loyalty of his base.  Sorry, but true Tr*mpistas are made of sterner stuff, and are capable of enduring a lot more cognitive dissonance before they succumb to doubt — so Republicans in Congress will have to find a way to squirm through to the next train wreck.

In the meanwhile, the rest of us continue to puzzle over why the President of the United States is so unswervingly loyal to Vladimir Putin.  Let's look at some of the most prominent suggestions:

The Pee Tape Hypothesis
By comparison with some other embarrassing episodes that have come to light, the tape described in the Steele dossier is small potatoes.  Even if Tr*mp was in the bed, naked, and photographed from an extremely unbecoming angle, religious conservatives would find it in their hearts to give him another "mulligan" — and the rest would call it a CGI "forgery" by "Hollywood liberals."

The Fragile Ego Hypothesis
While his reluctance to believe that Putin helped him win the presidency may explain Tr*mp's hostility to the Mueller probe, it does not explain his affinity for Putin.  In truth, he ought to be more likely to resent Russian interference if it detracts from his "glorious victory."

The Fred Trump Hypothesis
It seems obvious that Our President's hyper-authoritarian, racist, and conscience-free father was instrumental in warping young Donald's tender infant psyche and demagnetizing his moral compass.  While this helps to explain Tr*mp's admiration for the likes of Rodrigo Duterte and Recip Tayyip Erdogan, Fred never taught his son to knuckle under to a competitor — and certainly not to a competitor significantly weaker than himself.

The Arrant Corruption Hypothesis
The Nixon-era admonition to "follow the money" seems like the most  promising path to understanding the Tr*mp-Putin connection.  It remains unclear whether or not the Mueller task force has gained access to Tr*mp's tax returns, or how carefully cash transfers from Russian kleptocrats to the Trump Organization may have been laundered, but investors in Manhattan real estate never have been known for their moral rectitude.  If the corruption hypothesis is correct, it may be advisable for Tr*mp to give up the presidency in time for President Pence to issue a blanket pardon.

Posted by the view from vicworld at 4:15 PM No comments:

Formula for Profits
Delegates to the UN's World Health Assembly were blindsided by US opposition to a resolution encouraging breast feeding and condemning misleading promotions of infant formula; apparently they forgot that breast milk is free and that infant formula is the product of a $70 billion industry.  Ecuador, threatened with trade sanctions and suspension of military aid, had to withdraw its sponsorship; other developing nations faced similar threats.  The final, slightly weakened resolution had to be sponsored by Russia.

Kavanaugh
Susan Collins says she won't vote to confirm a Supreme Court candidate who shows "hostility" to Roe v. Wade.  Rest assured that Kavanaugh will show no hostility at all until he votes to overturn it.  Given that readiness to overturn Roe was a requirement for inclusion on the list of jurists the Federalist Society and the Heritage Foundation prepared for Tr*mp, Collins should have opposed all of them from the start, including Neil Gorsuch.

NATO
While insisting that all NATO members rapidly increase their military spending to 2% of GDP, Tr*mp strongly suggested the extra money be used to patronize American military contractors.  In truth, 2% of GDP seems a very reasonable expenditure for defense, and the US could set a good example by reducing its military spending to 2% of GDP (from 3.5%).  Do we really need all that overpriced hardware to combat jihadists wearing suicide vests?

Posted by the view from vicworld at 12:23 AM No comments:

On this date in 1776, an assembly of wealthy planters and merchants signed a document asserting it was "self-evident, that all men are created equal."  It was America's founding hypocrisy.

What actually is self-evident to anybody over the age of 12 is that wealth creates power, and that power creates wealth.  With only minimal interruptions, that has been the story of America — and the story of the world.  Once in a while, economic disaster combines with an especially incompetent plutocracy, resulting in a need to make enough concessions to placate an angry mob.  If things are especially bad, a new gang of plutocrats will push the old gang aside.

Whoever replaces Anthony Kennedy, rest assured she or he will be a committed corporatist, just as Kennedy has been.  Kennedy joined in the Epic Systems v. Lewis decision, which places crippling limitations on class-action lawsuits, making most legal actions against corporate abuse exercises in futility, for both consumers and labor organizations.  Janus was just the icing on the cake.

Since corporate America really couldn't care less about abortion rights, the fate of Roe v. Wade will be purely a political decision; but the Supreme Court already has allowed reproductive choice to be nickel-and-dimed away over much of the country, so there may be little practical change no matter how Susan Collins chooses to vote.  (Corporations do care about trade policy, though — so Tr*mp's hold over corporatist Republicans may be less secure than he believes.)

So, what's a frustrated leftist – or even a small-d democrat – to do?  Historical approaches include mass civil disobedience, boycotts, and strikes, preferably cloaked in populist patriotism.  Sharpen your pitchforks, peasants — but always remember to point them where the money is.

Posted by the view from vicworld at 9:22 PM No comments: