LINDA DIVALL: We did a dial test and breakout sessions in suburban Milwaukee with swing voters, with Wal-Mart women and with younger voters...

JUDY WOODRUFF: Now, what do you mean by "Wal-Mart women"?

(Linda Divall got that "Uh oh, now I've done it" look on her face. You could see that her mind was racing, trying to find a delicate way to explain a very indelicate phrase.)

LINDA DIVALL: We mean women who are -- as Anna just said -- are very concerned about the economy, women who are economically distressed, whose disposable income has declined rather substantially.

Neither Judy Woodruff nor Democratic pollster Anna Greenberg took her to task for what struck me as a blatantly patronizing expression, apparently already in widespread use within the McCain campaign. Now I'm hearing it all over the broadcast media, sometimes shortened to "Wal-Mart moms," but nobody seems to be giving the GOP the credit it deserves for the coinage.

I couldn't take my eyes off the reaction shots of the delegates as I watched the Republican convention. Clearly, there weren't any "Wal-Mart women" there. There were Norstrom women, Nieman-Marcus women, Lord & Taylor women -- but not a Wal-Mart woman to be seen. At the Republican convention, a Wal-Mart woman would have been viewed as a lower species -- somebody who really should have been in uniform, collecting the used coffee cups and sweeping up the confetti.

Sarah Palin, of course, is supposed to appeal to those "Wal-Mart women." She's just a regular gal, somebody you might find checking out the tabloids on the supermarket checkout line, or cheering on the kids at the local church sponsored wolf massacre. Is it any surprise she didn't look too comfortable during her interview with Charlie Gibson of ABC? 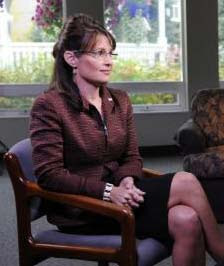 Look at her posture, closed off and defensive, legs crossed, hands clasped. Perhaps a defensive stance was called for, because Gibson didn't throw her many softballs. He treated her with all the respect a vice-presidential candidate deserves -- that is to say, the assumption that she would know how to answer substantive questions.

A group of McCain's top aides had exhaustively prepped her in the days between the convention and her first interview, and she had her talking points down pat. Her problem was that she hadn't been prepared with a talking point for every situation in a one-on-one interview. In a one-on-one, the interviewer can ask as many follow-up questions as he likes in an effort to get an answer that's not a talking point -- and that's exactly what Gibson did.

She didn't do badly, exactly, but she didn't do especially well either. Perhaps she needed more talking points, because she seemed to repeat herself, in exactly the same words, over and over. Some think it was unfair of Gibson to ask her about the Bush Doctrine without telling her just what that doctrine is, but even after he told her, her answer left much to be desired. I guess the McCain aides neglected to drill her on that one.

I wonder how much better prepared this ambassador to the Wal-Mart moms will be when it's time for the vice-presidential debate. Clearly, whatever she's learned by then, Joe Biden will know a lot more -- but demonstrating knowledge is not what the debates are about, as we've observed over the years. Can Biden be more likeable than Palin? We'll see.
Posted by the view from vicworld at 1:00 PM