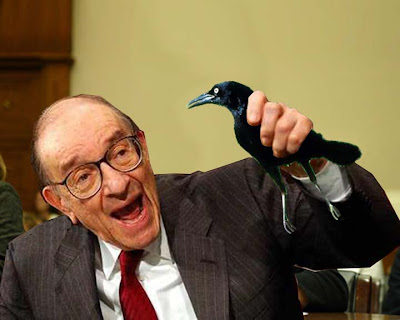 Did you see it? Did you see it? It was like Toto yanking away the curtain to reveal that the Wizard was, essentially, just another schmuck (except, in this case, most of the world would have preferred to stay in Oz and not go plummeting back down to Depression era Kansas.) Well, the hearing still was intensely satisfying, at least for me. My only regret is that Milton Friedman died a little too soon, and so never got to eat his own portion of crow while watching his immensely destructive life's work going down in flames. 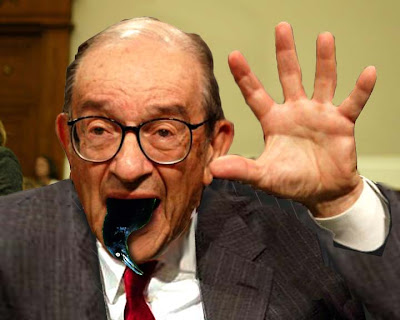 Speaking of screw-up economists, one of the architects of Reaganomics, Arthur Laffer, was on Bill Maher's show tonight. Remember the "Laffer curve," which purported to show how cutting taxes would increase government revenues? That bit of graphical nonsense was discarded years ago, but the stupid idea it was supposed to "scientifically prove" remained a basic tenet of the Republican faith, and is still alive and well in the McCain campaign.

It's now the next day, and I have to say I have a certain amount of admiration of Greenspan for eating his crow with an appropriate mix of contrition and dignity. We'll never know, but my guess is that Friedman would have choked on his own bile before admitting he was wrong.

Confronted by nothing more threatening than Maher and the bunch of college kids in Maher's audience, Laffer did the slippery-slide and disavowed his responsibility for three decades of ideologically driven economic auto-immolation. Perhaps, had he appeared on Maher's show instead of before Congress, Greenspan might have done the same -- but maybe not.

One way or another, if I were on the board of Mercer University, I'd try to find a way out of that unfortunate contract with Arthur Laffer. Tell me, provost, how are Soneshine Partners doing these days? How well is Alpha Theory software doing at predicting current market trends?

No matter. History has spoken. Laffer is a loser, and the epistomological paradigm shift is upon us. Maybe. Sigh.
Posted by the view from vicworld at 12:20 AM