I tore this paragraph out of today's Times. 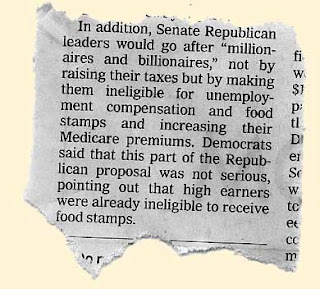 Just how stupid are we supposed to be? Mind you, it's not just the asshole Republicans, but also the asshole Democrats. Did they think we wouldn't get it?

I am acquainted with some people whose ideology dispenses them to agree with every idiotic thing they hear on Fox News, even though they're not idiots. I'm also acquainted with some idiots, but even they are not that stupid. All of us should be offended right now. According to recent polling, 91% of us are offended. The rest, for inexplicable reasons, approve of the job being done by our Congress.

There's a promo on Comedy Central where Carlos Mencia says, "Barack Obama looks like Curious Fucking George! There! I said it!"

We really need humor these days — but, preferably, not from Congress.
Posted by the view from vicworld at 10:05 PM