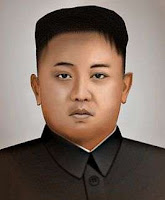 Over the next couple of months, the world will settle down to a nuclear-armed North Korea, China will be ignoring the economic sanctions it approved last week, and the USofA will move on to its next crisis.  We all can put our old classroom desks back in storage.
Posted by the view from vicworld at 8:38 PM