Shariah Law Advances in US 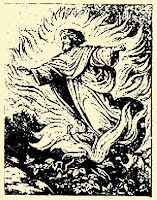 The anniversary of the 9/11 terrorist attacks seemed like a good time for an update on religious extremism.  Even without those emails from your crazy uncle, you should know that fanatics are working tirelessly to warp the American legal system with their primitive beliefs.

Okay, it's not exactly "Shariah" because the religion involved isn't Islam, but the chief objectives of all those Abrahamic preachers are the same: the subjugation of women and the de-eroticization of sex.  Leading the American jihad are Evangelical Christians, aided and abetted by conservative Catholics and orthodox Jews.  With the ascendance of the Tr*mp Administration, they have attained unprecedented prominence and power.

Much like the rulers of Saudi Arabia, they know that women are temptresses who lead men into moral peril, and hence must be denied birth control and abortions as a means to regulate their unbridled lust.  Babies will keep them at home, ready to satisfy the physical needs of their husbands and unable to tempt upstanding men like Mike Pence into the sin of adultery.

Speaking of Mike Pence, homosexuals are even more threatening than women because their only motivations for sexual activity are animal lust and immoral gratification.  Worse yet, the transgendered may be especially adept at enticing Mike Pence good Christians into carnal sin.  The Holy Warriors are determined that vulnerable members of the armed forces and bakers of wedding cakes will be spared temptation.

Health and Human Services and the Justice Department have attracted the most attention so far, but the fanatics are in all departments: the drive for "school choice," for example, is a campaign for publicly funded religious education.  Religious extremists are pervasive in the Republican Party, at all levels of government, working to deprive the rest of us of out civil rights.

No local stonings nor autos-da-fé have been reported from Kansas or Alabama so far, but religious extremists enjoy close cooperation with the NRA.  They are extremely well-armed.

Posted by the view from vicworld at 8:59 PM