Pundits traditionally dedicate year-end musings to making excuses for the things they got wrong.  Not me!  Here's what I wrote on January 2: 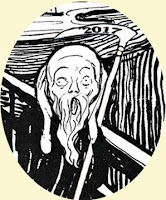 We can expect revisions to the tax code to make the party's benevolent billionaires even richer, at the expense of the rest of us.  We can expect windfalls for military contractors, the banking industry, any company that takes advantage of "public-private partnership" opportunities and, of course, property developers. Deficit hawks will insist such expenditures be "paid for" with spending cuts in other areas.  The most "obvious" places for cuts already are being eyed hungrily by GOP ideologues: environmental protection, health care (including Medicare and Medicaid), Social Security, the tattered remains of the rest of the social safety net, and regulatory enforcement.

Many hope for a Democratic "sweep" in the midterm elections,  but those elections still are a year away.  In the meanwhile, the religious right is aggressively advancing its agenda in increasingly accomodative courts.  In Masterpiece Cakeshop v. Colorado Civil Rights Commission, the Supreme Court will decide if bigots may cite "religious conviction" to justify discrimination against a minority group.  Although portrayed in the media as a gay rights case, the Court's opinion could establish a principle in law applicable to any category of persons.  Religious belief was offered as justification for racial discrimination in the 1982 case of Bob Jones University v. United States.  The Burger Court rejected that argument eight to one, but that was 1982.

The Bob Jones decision inspired Christian conservatives to seek political power, and now they have it.  This time the Court's decision will be much closer than eight to one, and may effectively overturn the earlier decision.  With unabashed hypocrisy, the plaintiffs seek to sway Anthony Kennedy's vote with claims that baker Jack Phillips is a "cake artist," and that  bigotry is "free speech."

Everybody knows how Tr*mp appointee Neil Gorsuch will vote.  My New Year's wish is that his egoistic grandstanding so alienates his conservative colleagues that they join with the liberals, just to put him in his place.  (It's New Year's, and I'm allowed to dream.)

Posted by the view from vicworld at 10:53 AM