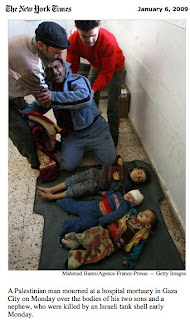 As long as images like this are appearing in the New York Times, Israel can't expect a lot of sympathy.

Do Hamas fighters mix in among the civilian population, intentionally drawing Israeli fire on children? Of course they do. Today, Hamas managed to draw fire on a UN sponsored school, which led to Israel racking up two dozen more civilian deaths. "But there were two dead militants too," Israel complained. "They were firing rockets!"

It doesn't matter. Tomorrow's Times will have pictures of more dead Palestinian children. If Israel hopes to compete for the hearts and minds of the rest of the world, it had better start rushing Israeli children into the paths of Hamas rockets. The only politically useful response to the other guy's dead children are dead children of your own.

So, suppose you're a member of the Israeli Knesset, and you think sending Israeli children to be blown up by Hamas rockets might not be too popular among your constituents. The "Hamas War," however well planned, is shaping up to be no more successful than the "Hezbollah War." What's to be done?

Sadly, you're likely to see the problem in political terms. Netanyahu and his Likud party have been leading in the polls lately, so Barak and his Labor Party are determined to show they can be even more belligerent than Likud. Kadima, still reeling from Olmert's problems, needs both Labor and the religious zealots of Shas to cling to power. It begins to look like peace isn't a viable option, unless some real pressure comes from an unlikely source -- the United States.

Nobody of any consequence in American government has ever dared criticize Israel, thanks to AIPAC and to wealthy American Jews who have been big contributors to political campaigns. This is not to say that Israel has not deserved American support -- it has, most of the time. Nevertheless, even one's best friends screw up royally from time to time, and real friendship demands that we stop enabling their self-destructive behaviors.

Right now, Israel claims it is trying to stop Hamas rocket attacks. Anybody actually paying attention, however, can see that Israel is engaged in a probably futile effort to destroy Hamas -- just as it tried to destroy Hezbollah when it invaded Lebanon in 2006.

Hamas won't be destroyed by a military incursion. Every dead Palestinian child will serve to recruit many more Hamas militants, and Iran and Syria will find ways to provide them with arms. The only way to destroy Hamas is to delegitimatize it, and the only way to do that is to help Fatah grow strong enough to become a viable alternative.

Mahmoud Abbas does not enjoy much respect in the Muslim world, primarily because he's been unable to win any real concessions from Israel. Israeli settlements continue to expand in the West Bank, movement from place to place remains severely restricted, and economic growth is impossible. Israeli political leaders, afraid to stand against religious fanatics and land hungry immigrants from the former Soviet Union, refuse to do anything that might help Abbas gain some legitimacy among the people he allegedly leads.

The incoming Obama administration could make a difference if it is willing to exercise some of the power three billion dollars a year in military aid ought to give the United States over Israel. Whatever the outcome in Gaza, and whatever the outcome of the elections that will be held in Israel next month, the United States must persuade Israel that its own interests will best be served by significantly improving the lives of Palestinians of the West Bank -- and making sure that Mahmoud Abbas gets the credit.

Abbas has made significant efforts to cooperate with both Israel and the United States, and it is time he got some cooperation in return. The only route to a two-state resolution of the Palestinian problem is letting Fatah succeed in helping Palestinians lead better lives. Killing Palestinian children -- no matter what justifications are offered -- is not the answer.
Posted by the view from vicworld at 12:55 AM