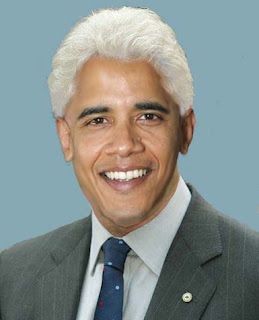 Anybody who knew me back in the nineties will recall that I was no fan of Bill Clinton, the Democrat who made me feel nostalgic for the liberalism of the Nixon administration. If you happened to notice me driving down the road on November 12, 1999, when the radio announced that Clinton had signed the repeal of Glass-Steagall, you'd have slowed down and moved into the most distant lane in an effort to avoid a total lunatic.

So now, after eight disastrous years of Bush, we have Obama -- putatively "the change you can believe in." Okay, I believe some changes have taken place. From Bush, we seem to have moved about halfway back to Clinton.

I'm not blaming you for this, America. It's not as if you had a hell of a lot of options -- and electing a (sort of) black guy made a lot of people feel like they were voting for change. The problem was that real change never was an option. The plutocrats were in charge, and they remain in charge. Lehman Brothers, Goldman Sachs, JP Morgan Chase, and UBS were among Obama’s top contributors. They gave him the early lead in the “money race” that made his candidacy viable.

In return, he let Robert Rubin create his economic team. Rubin, lest we forget, spent 26 years with Goldman-Sachs before he joined the Clinton administration. Together with acolyte Larry Summers and free-market ideologue Alan Greenspan, he quashed the regulation of derivatives and championed the repeal of Glass Steagall, making the current financial meltdown inevitable. Shortly before I found myself in my car, screaming at the radio, Rubin left the Clinton administration to sign on as senior advisor to Citigroup. Still working in that capacity, he signed on as chief financial advisor to Barack Obama.

So, what would you expect -- specifically, what would you expect of Rubin protégé Timothy Geithner, other than more "lemon socialism?" The private sector will "join" with the public sector to buy toxic assets from the afflicted banks that so generously supported Obama, and reap the rewards of any profits that might be made. Losses, of course, will be absorbed by taxpayers.

Clinton -- either one -- would have behaved no differently. On the other hand, if Hillary were president now, it's possible that a few other decisions would have been less Bushlike. A couple that come to mind are Obama's failure to overturn the Bush order allowing "faith-based" organizations receiving government funds to discriminate, based on religion, in hiring; and the continued use of "state secrets" as an excuse to protect Bush administration war criminals.

Well, maybe she'd have been no better. The same oligarchs who supported his campaign supported hers as well.
Posted by the view from vicworld at 3:59 AM