I know that nobody reads Karl Marx anymore, but just in case you happened to glance at the Cliff Notes, let me point out something interesting: the bourgeois revolution finally has arrived in Egypt. 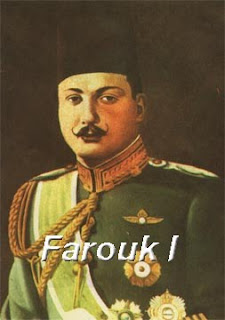 Like almost all the Middle East, Egypt never quite managed to emerge from the Middle Ages. It was kept marking time by a series of native born and colonial rulers who hogged up all the wealth and power, and distributed it to their families, friends, and toadies with little regard for the country as a whole. Granted, Egypt's last king (Farouk I) and his British enablers were deposed by the military in 1952, but new strongman Gamal Abdel Nasser merely transferred the graft and related goodies to new favorites, while distracting the populace with pan-Arab nationalism and military campaigns against Israel. His successor, Anwar El-Sadat, figured out that there was more money to be had by cooperating with the United States and making peace with Israel than in remaining recalcitrant.

Anyway, Mubarak has followed in Sadat's footsteps for almost thirty years. Presumably, it was the uprising in Tunisia that inspired the current uprising in Egypt, and both Tunisia and Egypt seem to be following the same pattern — the middle class, tired of being cut out of the loop for acquisition of the really big bucks, has finally had enough.

Egypt's is not a revolution arising from political discontents; the young people in the streets couldn't care less about creating a "democracy." It also has nothing to do with Islamism; the Muslim Brotherhood may be hitching a ride, but the movement, at its roots, is secular.

The problem, as always, is economic — unemployed and underemployed Egyptian youth, mostly children of the middle class, want a chance to make lives for themselves. If the resurrected zombie of King Farouk could guarantee them decent jobs and a chance to move out of their parents' basements, they'd follow him. They've been joined by many older workers who have gone years without opportunities to use their skills, and even some of the poor — although most of those abandoned all hope years ago. (Popular revolutions always begin with the middle class.)

So, that got me to thinking about this other country with an entrenched plutocracy; large numbers of young people unable to move out of their parents' basements; middle class college graduates working in temp jobs and unpaid internships; and older workers apparently doomed to structural unemployment for the rest of their lives. Is it time for a popular uprising?

Probably not, unless you're willing to count the Tea Party. Just the same — in case any of you are interested and connected to the social media — allow me to suggest Cairo, Illinois as an initial rally site. It just might help get the point across.
Posted by the view from vicworld at 11:44 AM