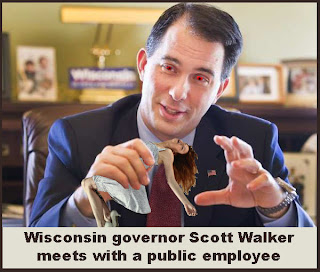 The Republicans have a new hero.

Wisconsin governor Scott Walker and his Republican controlled state legislature have launched a vicious attack on the state's public employees by attempting to bust their unions. The governor maintains that taking away public workers' right to collective bargaining is necessary to reduce the state's deficit, and the major media seem happy to parrot that justification.

Needless to say, that's a lie.

Of course, it's a lot easier to balance a budget on the backs of public workers when government can dictate the terms of employment. Health care costs going up too fast? Easy. Just take away their health insurance — all of it. Need more money to give even more tax breaks to business interests? Easy. Just take it from the public workers.

(Incidentally, the real reason Wisconsin is in deficit — instead of running a surplus — is because Walker signed two big tax giveaways to business and another tax break to encourage an experiment with health savings accounts. Before that, Wisconsin was in very good shape by comparison with other states.)

In other words, Walker created the deficit, then used it as an excuse for union busting. I've got a word for that.

Exempted from the proposed anti-labor law are law enforcement and firefighting unions, either because they were supportive of Walker during the election, or because the public may be willing to live without schools, but not without cops and firefighters to protect them from the depredations of young people who aren't going to school. It would be nice if the cops and firefighters would support their fellow public workers if a general strike became necessary. I wouldn't count on it, though. After all, they got theirs — and "everybody" knows that they're special.

Every cloud has a silver lining, though. Unions, nationwide, are waking up to the real Republican agenda — wiping out whatever remains of the American labor movement. Union members, frightened and disheartened in recent years, finally seem to have had enough.

Thanks, Scott. We're awake now, and ready to push back.
Posted by the view from vicworld at 5:13 PM