Just in case you were not aware — and hardly anybody is — there already is a Keystone pipeline, extending from the oil sands of Alberta to Cushing, Oklahoma, and St. Louis, Missouri. Our President just announced that he wishes to expedite a southern extension of the pipeline from Cushing to the refineries of Port Arthur, Texas. 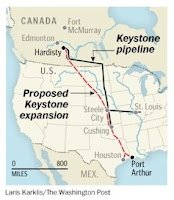 Why Port Arthur? Because it's a port, of course! That makes the refined products much simpler to export. The United States is a net exporter of petroleum products, and the southern leg of Keystone will help to expand those exports. It will not increase the supply (much less lower the cost) of gasoline in the United States.

Granted, that would help to reduce, to a small extent, our trade deficit — but selling jet fuel to European airlines does nothing to relieve the current stress on American drivers. If the idea were to increase American gasoline supply, it would make a lot more sense (environmentally as well as economically) to approve a fairly short new pipeline from Alberta to Montana, where there are refineries that serve the United States.

The devil, as always, is in the details. The American public, typically, has no clue.
Posted by the view from vicworld at 11:24 PM