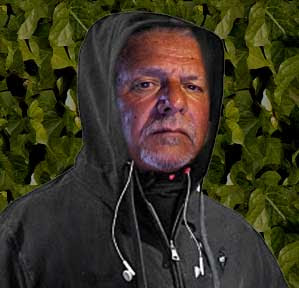 Hmmm... this guy looks like bad news. Maybe you ought to shoot him.

Okay, he seems to be a bit older than the people you ordinarily shoot, and a bit whiter. Just the same, that's a threatening look on his face. Are you feeling threatened?

In Florida, you can feel free to shoot him, with the blessing of the NRA inspired and ALEC drafted "Stand Your Ground" law. Very similar laws exist in 23 other states, and the movement seems to be spreading, despite the outcry over the murder of Trayvon Martin.

As of this writing, George Zimmerman, the man who shot Trayvon Martin, has been neither arrested nor charged with any offense. As far as I can tell, the Sanford police didn't even confiscate his gun. He tells a fairly incredible story about being attacked by the 140 pound teenager — about 100 pounds less than Zimmerman weighs — and acting in self-defense.

To me, George Zimmerman sounds like a very scary man. Even though I'm an old white man and I had to Photoshop myself into that hoodie because I don't own any, I'm pretty sure I'd feel threatened if I ran into him on the street. Florida law, I believe, permits me and anybody else who shares my apprehension the legal right to blow him away. No wonder he's in hiding.
Posted by the view from vicworld at 12:25 PM