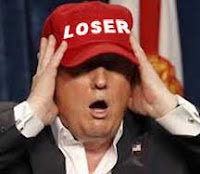 So far, Tr*mp has chalked up an impressive series of losses to refugees, in the courts, and a rather stunning loss to Barack Obama, whose Affordable Care Act stubbornly survives.  The latest effort at repeal might make it through the House, but the Senate is a different matter.

If Tr*mp's campaign promise to uproot the establishment ever was serious, it is clear that the establishment has won.  Perhaps his failure to fill many government posts makes the swamp a bit more shallow, but its miasma is no less foul.  The usual moneyed power brokers remain just as entrenched as ever, if not more so — and his recent PowerPoint slide posing as a "tax plan" suggests they have nothing to fear from Tr*mpian "populism."

In foreign policy, it took Xi Jinping ten minutes to revamp Tr*mp's attitude toward China.  Trudeau and Peña Nieto took about that long to reverse the "master negotiator's" dismissal of NAFTA.  Let's hope he doesn't have a sit-down with Kim Jung Un.

If there is a "loser" to date, it is the environment.  The rollback of rules and regulations to protect public lands and slow the rate of climate change for the benefit of extractive industries may represent, in Tr*mp's narrow mind, a "victory" over Obama – or Al Gore – or Woodsy Owl.  Who knows?  We only can hope that Our President's irrepressible incompetence will minimize the damage done.
Posted by the view from vicworld at 5:14 PM