So Pence has been rattling Tr*mp's saber in another exercise in ball-swinging as foreign policy.  Sad to say, there are those in Washington dumb enough to think that may be an effective strategy.  Far more, I suspect, are not so optimistic.

Lots of Republicans are happy to revel in the short-term political popularity that chest-thumping inevitably elicits from all too many Americans, and plenty of Democrats just wish it were Hillary tweaking Kim Jong-un's button nose.  Wiser heads, though — people who actually have been paying attention since Kim came to power at the end of 2011 — are aware of a few basic truths:

• Kim has absolutely no reason to give up his nuclear weapons, and only major concessions will persuade him to suspend development of his missile program.  He will not disarm. 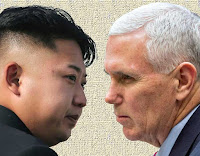 • China cannot "control" Kim Jong-un.  North Korea is a greater threat to China than to the United States, and its economy already is so dreadful that more Chinese sanctions cannot make it notably worse.

• The government of North Korea long has considered its citizens expendable in pursuit of ideological purity and political survival, so regime change only can be accomplished by total devastation — inevitably accompanied by similar devastation of South Korea and Japan, not to mention the American troops stationed there.

So what's to be done?  Not much.  We could hope for a political revolution, but those always begin with the middle class — and North Korea doesn't have one.  Anyway, Kim is enormously popular with his people, having elevated populism to levels Tr*mp only can dream about.

We could hope for a coup d'etat, but Kim started his political career by killing his uncle and anybody else in his government who might threaten his control.  Recently, he even took the trouble to eliminate his largely innocuous half-brother.

So here's an admittedly outlandish idea: we could work to fully integrate North Korea into the world system of trade, elevating living standards and raising popular expectations.  Interdependence works a lot better than sanctions when it comes to drawing a rogue nation into the international community — and at this point, it's the only strategy we haven't tried.
Posted by the view from vicworld at 10:50 PM