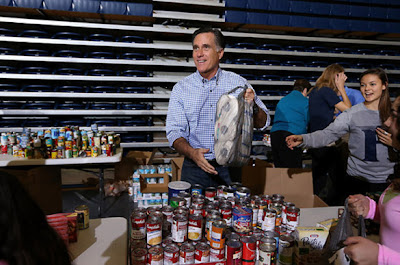 Indeed, a picture is worth a thousand words.  Here is Mitt Romney, "responding" to Superstorm Sandy.  What fun!  Yes, this is the "free market," privatized version of FEMA.  Just in case you are thinking it was a nice "gesture," bear in mind that Romney's small pyramid of chicken noodle soup from Ohio won't make it to the Northeast for weeks — if ever.

(That teen on the right looks so excited!  What happened next?  Was she reaching out to squeeze the candidate's Charmin?  And the distraught looking women in the background — were they agonizing over whether anybody in the Greater New York area actually would consume Spam or canned vegetables?  Well, ladies, maybe it would be better to send it to a red state.)

Far be it from me to have any certainty of what might be passing through the thoughts of New Jersey's larger-than-life Republican governor, but...  I can guess.  Hence, what follows is just a guess, not a prediction.  (I don't do predictions anymore.)

Bipartisan?  Bullshit.  Will it be Cuomo v. Christie?  Christ, will it be two Northeastern governors snarking around against each other?  Unlikely.