In Memory of Elliot Carter 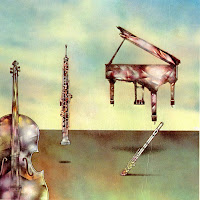 Elliot Carter was my introduction to modern music.  His Sonata for Flute, Oboe, Cello & Harpsichord and Sonata for Cello and Piano may have been the first modern works I purchased – on LP, of course, cover illustration attached — albeit my first purchase may have been Peter Maxwell Davies' Eight Songs for a Mad King.  Who remembers, when it's that long ago?

Elliot Carter died a very old man, and was productive right up to the end of his life.  May any of us so productive last so long.  Okay, not many of us are anywhere near so productive, and we probably ought to die a hell of a lot sooner.

In case you were wondering, I got into the booth today and voted for Jill Stein.  Ideology outweighed unwarranted guilt, and if Obama loses my very safe state, he indisputably deserves it, Sandy notwithstanding.  I'm pretty sure, though, he didn't.
Posted by the view from vicworld at 5:48 PM