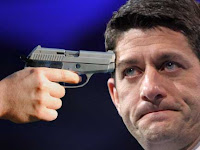 Well, on to tax reform!  Sadly for Ryan, he was counting on the tax cuts from the failed health bill to make the numbers look vaguely reasonable in his tax package.  There's also quite a bit of division among his party's corporate contributors over those ideas for boosting exports and making imports more expensive.  There could be more chaos on the Hill forthwith.
Posted by the view from vicworld at 2:32 PM No comments:

Don't count on conservative "opponents" to torpedo the Ryan plan for ending Obamacare.  The Freedom Caucus is making noise, but at the heart of the current proposal is a goal dear to the far right: the destruction of Medicaid.

Most Americans who have health insurance enjoy it as an employee benefit, and are entirely indifferent to the cost of purchasing their own.  Nevertheless, the insurance exchanges got most of the attention in debates over the ACA — even though it was the law's expansion of Medicaid that was most significant in bringing health care to millions who lacked it.  The Republican "Patient's Choice Act" will not merely eliminate Medicaid for those enrolled in the expansion, but create a system of block grants to the states that will destroy the program entirely.

The single most important goal of the Obamacare repeal, like virtually every other piece of Republican legislation since Reagan, is to cut taxes on the rich.  Finding the money to do that inevitably involves reducing benefits for everybody else.  Ending Medicaid — which pays for half the babies born in the United States and half the elderly in nursing homes — uses a lot of money that otherwise might be lining rich people's pockets.  Sad.

The Patient's "Choice" Act will give poor patients a "choice" between medicine and food.  The chief hope for its failure is defections by Republican senators from states where Medicaid was expanded under the ACA, and where its elimination may do some real political damage.  Those senators now are working hard to figure out just how much damage might be done, and how well that damage might be offset by the gratitude of wealthy donors.
Posted by the view from vicworld at 9:47 PM 1 comment:


Colbert called it "truthiness" — people believe things that feel like they ought to be true.  To those who distrust and despise Obama, the idea that he ordered communications tapped at Tr*mp Tower prior to the election is a perfect fit, and that is what sucked Our President down his latest rabbit hole.  He, himself, is no less impressionable than his "base."

I read the Breitbart report on the Mark Levin conspiracy theory that seems to have inspired the tweetstorm that initiated the latest political crisis. Breitbart makes Levin more "credible" by tacking on a time line.  The time line offers no actual evidence, but it looks like evidence.  For truthiness, that's good enough.  The proverbial fan was well-spattered at 7AM.

Congressional Republicans, some of whom are rational, had to respond — and Congressional investigations, which frequently stretch on until their original focus is forgotten, are the most rational course of action under the circumstances.  (Democrats are not the only ones struggling to survive the Tr*mp presidency.)  This latest bit of executive irrationality, though, leaves an extremely large lump under the carpet, and Democratic glee seems well justified.

In the meanwhile, though, Russian government interference in the recent election will be investigated by the very same committees investigating the "breach" of Tr*mp Tower, and it wouldn't hurt to remember that we haven't seen the evidence for that either — we base our belief on the "authority" of the intelligence agencies.  Okay, those agencies are more authoritative than Mark Levin — and anyway, it just feels right.
Posted by the view from vicworld at 10:46 AM No comments: 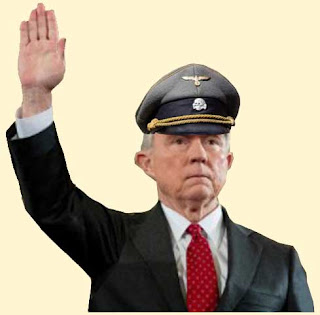 Speaking of fascism, Tr*mp's "VOICE" program, which will publicize crimes committed specifically by immigrants, is chillingly reminiscent of Hitler's program to publicize crimes committed specifically by Jews. Fascists always need an "enemy within" to justify authoritarian overreach; and as Dietrich Bonhoeffer would observe if he were here today, after they come for the immigrants, they'll be coming for you.
Posted by the view from vicworld at 5:22 PM No comments: