I don't have to be "civil" to Nazis.  I don't have to be "respectful" to white supremacists, oppressors of women, gay bashers, holy hypocrites, baby snatchers, or any of their self-serving enablers.  Kirsten Nielsen can choke on her fajita, and Sarah Huckabee Sanders can shove her cheese plate up her ass.

I don't have to feel any sympathy for the gun toting cretins in their MAGA hats, no matter how fearful or confused or flat-out stupid they happen to be.  When they parrot their despicable Fox News hatemongers, I will not be bothered to hide my disgust or restrain my contempt.

Recent actions in the service of our Psychopath-in-Chief, too numerous and too despicable to describe in this small space, have left me to choose between anger and despair.  I choose anger.  Watch out.

Most Americans are horrified by the policy of separating immigrant children from their parents at our southern border, and plenty of politicians, whatever their real feelings, have concluded it is in their best interest to say they are as well.  Even our Psychopath-in-Chief has mouthed concern, while blaming Democrats for the damage he has done.

The "deterrent effect" claimed by Jeff Sessions is a ruse: desperate families are unlikely to believe that emigration to the US presents a greater threat than the gang violence and poverty that drives them from their homes.  Immigrant children are just the latest bargaining chips in the Republican effort to remake American immigration policy: holding DACA recipients hostage was not enough to sway Democratic votes in Congress, so Republicans have upped the ante.  "If we kidnap the babies," one imagines Stephen Miller whispering in Tr*mp's ear, "you'll get your Wall."

One only can hope this latest "negotiating tactic" is ineffective: that Democrats will hang tough, and that enough Republicans will find (or feign) the decency required to reject the radical and racist Ryan "compromise" bill, forcing a humane, immediate resolution of the current showdown.  Too much damage already has been done.

Our President has advised us that we can "sleep well tonight" because "There is no longer a Nuclear Threat from North Korea."  Presumably, that means he will ignore entreaties from John Bolton and refrain from a first strike: there never was any threat that North Korea would begin a war with the US.

While Tr*mp is deciding where to display his Nobel Peace Prize, most of the world is trying to figure out just what the US may have gained from the strikingly nebulous Singapore agreement.  Kim achieved his primary objective: China and Russia now can gracefully back out of the US imposed sanctions regime.  As a surprise added bonus, he got an end to the annual joint military exercises the US has conducted with the South.  (Tr*mp accurately described those as "war games.")

As for the "Great Negotiator," one more opportunity to strut across the screens of Fox News viewers seems hardly worth the trip.  One wonders whether North Korea's famously skilled hackers may have penetrated Russian computers and secured a copy of the Piss Tape.  And wouldn't it be wonderful if Canadian, French, or German hackers could do the same?

Posted by the view from vicworld at 2:36 PM No comments:


Reflection on the G7 meeting leads to two inevitable conclusions:
• The "American Century" has ended a bit early.
• That piss tape must be truly extraordinary.

It is hard to imagine anything more Our President could have done to antagonize our closest allies and advance Russia's diplomatic agenda; and his ad hominem attacks on Justin Trudeau were the icing on the cake.  While ignorance, hubris, and a perishingly fragile ego may go a long way towards explaining the latest presidential tantrum, it is hard to ignore the fact that so much of the Tr*mp "agenda" accrues to the benefit of Vladimir Putin.

I will not venture to guess what new mayhem may be unleashed tomorrow in Singapore, but I have a strong suspicion that Kim Jong-un is the better prepared and better advised partner to the negotiations — and that, somehow, Russia will come out ahead.  In the meanwhile, here's my nominee for tweet of the week: 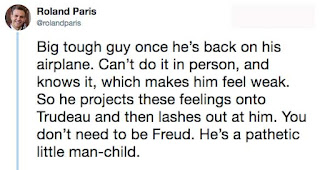 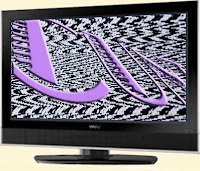 We all know "The N-Word Rule," delineating who is "allowed" to use that powerful term.  Is there a "C-Word Rule" that follows the same logic?  Far be it from me to mansplain such matters.  Still, I do see a correspondence between Samantha Bee's vulgar reference to Ivanka and Roseanne Barr's racist tweet: both women put their employers in the uncomfortable position of having to decide what to do about them.

Roseanne appeared on ABC, which is a subsidiary of Disney: a company that has been polishing its family-friendly reputation for as long as anybody can remember.  Disney gambled on the self-control of an unstable racist, and it lost.  Full Frontal with Samantha Bee appears on TBS, which is owned by Time-Warner; and Time-Warner soon may become part of AT&T,  a company nobody likes anyway.  Marketed as a foul-mouthed assault on Tr*mp and company, the show won't lose any viewers; queasy sponsors will be replaced as soon as public attention is diverted by the next outrage.  The show stays on the air in an instructive illustration of "corporate ethics."

There are a great many late night shows that can be mistaken for MSNBC with a laugh track — possibly too many.  Watching TV, of course, is not a form of activism — but it can feel like it is.  Do the comedy shows ever inspire any action, or are they just profit-making wall decorations inside the liberal information silo?  When did comedy get so depressing?  And, tell me, are you bored yet?

Posted by the view from vicworld at 11:00 PM No comments: