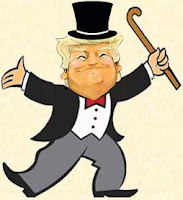 Nobody can claim to be surprised by the way Our President responded to CIA assurances that Prince MbS did, indeed, order the murder of Jamal Khashoggi.  Tr*mp did stop short of claiming that Khashoggi was an Iranian agent, but only by a hair's breadth.

News analysts, once again, had to come up with a term to describe Tr*mp's approach to foreign policy.  Seizing on his emphasis of $110 billion dollars in imaginary arms contracts, once again they settled on transactional.

Other terms come to mind — "morally bankrupt" is a strong contender — but rule books at major media outlets demand the appearance of neutrality, and transactional is such a neutral sounding word!  It started me thinking, though.  Rather than transactional, they could have used corporate.

The Supreme Court long has recognized corporate personhood.  (The recent Hobby Lobby decision maintains that a corporation is enough of a person to have religious beliefs!)  Unlike your average person, though, corporations have but a single objective: to increase the wealth of shareholders.  Pretty much any corporate "person" would have made exactly the same decision as Tr*mp: their values appear to be identical.  Tr*mp just might be the embodiment of corporate personhood.

If a corporation really were a person, driven by a single goal to the exclusion of all others, that person would be diagnosed as psychotic.  Presumably, Our President has a variety of goals; but, as we've seen, his approach to all of them is the same — transactional.

Posted by the view from vicworld at 11:05 PM No comments:


I haven't posted lately because I try to avoid belaboring the obvious. but I'll make an exception this time to reassure my readers that I'm still alive:

Posted by the view from vicworld at 12:16 PM No comments: