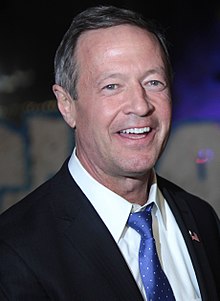 Do you remember this guy?  He's Martin O'Malley, former governor of Maryland: a traditional liberal who could have been President of the United States.  Think back to the Democratic primary debates of 2016 — got it now?  He was that "other guy" on stage with Hillary Clinton and Bernie Sanders.  I don't doubt for a moment that he would have been a stronger candidate against Tr*mp than either of his opponents.

Frankly, I wouldn't mind seeing O'Malley get the nomination in 2020, if he decided to try again — but he won't.  Neither will Oprah, who is one of the smarter celebrities out there.

Can the Democrats blow it again with the wrong candidate?  Here's a hint: they ran Adlai Stevenson against Eisenhower a second time after he lost spectacularly the first time.  Even against Tr*mp, the most unpopular president in any living person's memory, Democrats could go wrong.

The Tr*mp presidency has liberated intrinsic American racism and sexism.  Despite backlash from #blacklivesmatter and #metoo, the infection is deep, virulent, and not nearly so embarrassing to the infected as it was a decade ago.  To win in 2020, Democrats just might have to put yet another white male at the top of their ticket.  Have no doubt that the Democratic establishment is struggling with the problem of satisfying its black and progressive female voters while bringing along enough of Middle America to gain an electoral victory.

Obama won the presidency because he never seemed black enough to threaten white America.  Corey Booker has those skills and much of the same charisma, but party leadership must be wondering whether Obama used up that particular kind of appeal.  Kamala Harris could do well with Democrats on the left, but her chief appeal to the party leadership might be as a black female running mate to a "dependable" white male.

Elizabeth Warren's focused sincerity, intellect, and genuine populism might make her the strongest female contender, but too many men (like Tr*mp) find her threatening.  Kirsten Gillibrand is too strongly identified with feminism for those same men — and there are lots of them — but would be another strong contender for the number-two slot.

So what about the white males?  The geezers in contention are Bernie Sanders, who sounds ready for another run, and Joe Biden, who wishes he hadn't dropped out last time.  Are millennials ready for more gerontocracy?  Neither Sanders nor Biden is much older than Tr*mp, and Biden would have a strong shot at the presidency even if the Republicans dump Tr*mp for a less embarrassing candidate.  The most attractive candidate among the younger white men might be Sherrod Brown: progressive, handsome, and from Ohio.

With any luck, Andrew Cuomo will be too wrapped up in ethics investigations to have a serious chance at the nomination.  I've sworn off making predictions, but I see a very strong possibility that frightened Democrats will dust off Biden and let him try again.
Posted by the view from vicworld at 5:31 PM No comments:

Our President was not happy to learn he had to cancel his $100,00 per couple party celebrating his first year in office.  He sincerely was looking forward to hearing a pack of fat cats tell him how great he is, but alas, that was not to be.  Just the same, I'm willing to bet he kept the money.

I suppose it's interesting to see the Democrats take a stand on something that resembles principle — even though saving DACA currently is more of an excuse for a fight than an ideological imperative to party leadership.  Most important is to demonstrate that Democrats can be just as obstructionist as Republicans were under Obama.  What we have now is a political power struggle, pure and simple.

Of course, this particular battle could have been averted had the President displayed any consistency in the positions he took regarding immigration policy over the past week — or any of his self-proclaimed genius for negotiation.  Sadly, Tr*mp's pathetic need to please empowers whoever last occupied his brief attention span — and Stephen Miller effectively ensures that those people always will be conservative extremists.

Posted by the view from vicworld at 12:20 PM No comments:

Fire and Fury
Unlike many other commentators, I suspect, I actually read Michael Wolff's chatty and frequently amusing chronicle of his sojourn in the Tr*mp White House.  Anybody who's been paying attention cannot be surprised by any of it — including the general consensus among White House insiders that their boss, in the words of his Secretary of State, is a "f*cking moron."  (Granted, the brutality of their contempt for Jared Kushner exceeded expectations.)

I did wonder what combination of hubris and alcohol inspired Steve Bannon to babble his way into a schism with Rebekah Mercer, his primary financier.  Breitbart, apparently, concluded that its association with the Mercer billions far outweighed its association with Bannon.  If Bannon makes a comeback, it would be evidence that his "populist" movement was more grassroots than astroturf.  Don't hold your breath.

Sh*thole countries
Yes, the asterisk is absurd — but necessary for stylistic consistency with my spelling of "Tr*mp."  In truth, the vulgarity itself was less meaningful than Tr*mp's invitation to Bob Goodlatte, Tom Cotton, and other anti-immigration extremists to his meeting with Lindsey Graham and Richard Durbin to discuss their bipartisan proposal for action on immigration.  Tuesday's televised bipartisan dog-and-pony show was, after all, on Tuesday.  Somebody else must have bent Our President's ear in the intervening two days — most likely Stephen Miller.

Tr*mp, predictably, went to Twitter to deny saying what he said, but the outlook for DACA recipients is not good right now — and the same may be true for an agreement to prevent a partial government shutdown on January 19.

The Koreas
One truly must admire South Korean President Moon Jae-in for crediting recent diplomatic rapprochement with the North to Our President's infantile bellicosity.  Granted, the ploy was so transparent as to be laughable, but nobody ever lost a nickle by overestimating the Tr*mpian appetite for praise.  Presumably, we are safe from nuclear holocaust — at least until after the Winter Olympics.

It would be nice if the Senate finally got around to confirming Dr. Victor Cha's appointment as ambassador to South Korea.  Unlike certain other Tr*mp appointees (see Pete Hoekstra), Cha has both the experience and the expertise he needs to do the job.

Posted by the view from vicworld at 5:03 PM No comments:

The Mess in Iran

To begin understanding the current situation in Iran, it may help to remember some history.  In 1953, US and British intelligence agencies fomented a coup against Mohammed Mossadegh, the democratically elected Prime Minister.  When Mossadegh nationalized the Iranian oil industry, the oil companies thought they'd rather do business with the Shah, unencumbered by democracy.

Shah Mohammed Reza Pahlavi ruled a police state until he was ousted in 1979.  Under his rule, Iran westernized and secularized; the cities prospered and women got the vote, while enemies of the state – Islamists and Communists – were executed or forced into exile.  Resistance to the police state came to be associated with resistance to westernization, so Islamic clerics came to lead the political resistance, and conservative Shi'a Islam became the ideology of revolution.

In the quarter-century the Shah was in power, though, a lot of urban Iranians came to lead quite secular lives.  While the rural population welcomed Islamic rule, city dwellers never quite came to terms with rule by the Ayatollahs. Still, US support for Saddam Hussein in the Iran-Iraq War helped maintain their support for the Islamic Republic.

Teheran, though, has remained relatively quiet in recent days; the strongest opposition to the regime comes from the small cities and towns far from the capital.  The most loyal supporters of the Ayatollahs now are expressing the greatest discontent.  Economic problems caused by mismanagement and corruption are the focus of their concerns, problems magnified by economic sanctions that were loosened but certainly not eliminated by the Iran nuclear agreement.  Exclusion from the US banking system makes trade even with willing partners very difficult.

A few demonstrators are reported to have called for a return of the Shah, but the largest number of Iranian monarchists currently are growing old in Los Angeles, and no news organizations are clamoring to interview the Crown Prince.  Our President's tweets "in support" of the protestors help only the current regime: any Iranians who long for a return of Anglo-American petroimperialism are well-advised to their heads down.

Word is that the budget documents that sparked the current unrest were leaked to the public by Hassan Rouhani, to call attention to large expenditures on religious institutions and the Revolutionary Guard.  Iranians might have tolerated a reasonable amount of graft and cronyism in a better economic climate, but not while living standards continue to decline.

The thing to watch for now is how the demonstrations alter the balance of power between Ayatollah Ali Khamenei's archconservatives and President Rouhani's moderate reformers.  Security forces are likely to put an end to the demonstrations quite soon, but the political impact on Iran remains to be seen.
Posted by the view from vicworld at 6:00 PM No comments: