Clearly, Clinton was guilty of abuse of power – not necessarily his political powers, just the usual power of an executive over an intern.  Democrats should have forced him to resign, but #MeToo wouldn't arrive for another eight years.  Although I'd like to believe today's Democrats would behave differently, somehow I doubt they would.

Tr*mp's abuse of power, especially his obstruction of Congress, goes far beyond anything Clinton attempted twenty-two years ago; but the Republican response follows the same pattern established by Democrats in 1998, and the outcome of his "trial" is sure to be the same.  Whether or not Tr*mp's overall moral degeneracy exceeds Clinton's is unclear: politicians necessarily are more circumspect than playboy real estate tycoons.

Meanwhile, plenty of Americans – Democrats as well as Republicans – are thinking, "They all do it."  In future administrations, that assessment very well may prove to be true.

Posted by the view from vicworld at 12:44 PM No comments:


When, at their private meeting, Elizabeth Warren told Bernie Sanders that she was entering the Democratic primary, his first thought had to be "She'll split the progressive vote, and Biden will get the nomination.  How do I talk her out of this?" 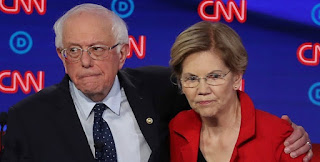 One obvious albeit ill-considered argument: "I don't think a female candidate can beat Trump."  Maybe it slipped out before he had a chance to reconsider: I seriously doubt that Sanders actually believes it.  Almost a year later, it must be hard for him even to believe he said it — but, be that as it may, his denial at the debate did amount to calling Warren a liar.  (I winced.)

I was hoping for something more like this:  "I don't remember saying anything like that, but if I did, I apologize — I certainly don't believe a woman can't be elected."  Then, he could have gone on about Clinton's victory in the 2016 popular vote, et al.

Hopefully, the progressive wing of the party can get its act together in short order, because failure to do so only empowers the Democratic establishment.  Americans wanted change in 2016, and they still want it in 2020. Frankly, I have strong misgivings about Biden (much less Buttigieg) defeating Tr*mp in November.

Posted by the view from vicworld at 3:40 PM No comments:

Qassim Suleimani
The Suleimani assassination would have made sense had there been reliable intelligence that it would set off a destabilizing power struggle within the Iranian government; but reliable intelligence, in either sense of the word, is not characteristic of the Tr*mp Administration.  The action's chief impact has been to put a damper on resistance to Iranian influence in Iraq.  While many attribute the killing to Our President's shoot-from-the-crotch strategic incompetence, one still wonders: How does it benefit Putin?

Mark Galli
Back in the 90s, liberals were broadly accused of practicing situation ethics: choosing to violate basic moral codes for the sake of some "greater good."  Currently, that philosophy's main adherents are conservative Christians, most of whom were outraged when Mark Galli's editorial in Christianity Today identified Tr*mp as "a near perfect example of a human being who is morally lost and confused."

Carlos Ghosn
Given the 99.9% conviction rate in Japanese courts, nobody can be surprised that somebody with the wealth and influence of Carlos Ghosn would find a way to jump bail.  Was Ghosn under-reporting his income, as charged?  Probably: it's what the super-rich do.  Does that explain why he was indicted?  Highly unlikely.

Elizabeth Warren
Clearly, the drop in contributions to the Warren campaign was a direct outcome of her waffling on "Medicare for All":  the left wing of the Democratic Party is in no mood for compromise.  Granted, some sort of compromise will be required to get any such program through Congress, but facing up to reality is never a winning strategy in electoral politics.

Posted by the view from vicworld at 2:35 PM No comments: