When I was a kid, Timbuktu was a metaphor for the farthest reaches of the world.  Within the last few days, it's been the middle of a fight against Islamic militant crazies.  What we're finally discovering, though, is that it is a center of Sufi learning, and what might be the best of Islamic culture.  We still don't know how much damage the Salafi assholes did to the Timbuktu libraries and cultural sites, but there is one thing that is certain — for whatever remains, we have to thank the French.

When the French refused to join the USofA in the invasion of Iraq, and asshole Republicans started talking about "freedom fries," the French were a lot smarter than the Bush administration.  Okay, Parisians are no more tolerant of redneck tourists than, say, New Yorkers, but how can you fault them for that?  When Francois Hollande — self-confessed Socialist — sent a limited number of French troops into Mali, his decision made a lot more sense than when Bush sent a hell of a lot more Americans into Iraq.  In the Maghreb, there is a real threat.  Saddam Hussein was a very bad guy, but never a threat to American interests.  More than anything, he was a counterbalance to the Iranians.  Well, that's gone.

Vive la France.
Posted by the view from vicworld at 8:32 PM No comments:

There is no doubt that Barack Obama said all the right things yesterday.  Maybe he's ready to become a real progressive in his second term.  Of course, as your mother told you, actions speak louder than words.  We'll have to wait and see.

Oddly enough, I suspect the item on his progressive agenda most likely to succeed is gay rights.  "Seneca Falls, Selma, and Stonewall" not only was a great piece of alliterative speechifying, but a wonderful way of linking the three main branches of the equal rights movement, and raising the LGBT community to a kind of equality it has not enjoyed before.

His reference to Social Security, Medicare, and Medicaid without using the denigrating term "entitlements" was encouraging, but I'm waiting for him to back up from his offer to accept a chained consumer price index (discussed in an earlier post) for determining increases in Social Security payments, veteran's benefits, and such like.  His expressed determination to move forward to address global climate change by using executive orders made it sound like he might actually do something this term, albeit an article in today's Science Times suggests it might be a bit too late.

(It was nice to see Mitch McConnell and Paul Ryan all riled up on TV, but I really was hoping for a chance to see Louie Gohmert (R-TX), who may be the most moronic member of the House, stick his foot in his mouth.  I'd think he might be the stupidest man in Texas, except for those people who keep reelecting him.)

"Black guns" (aka paramilitary/assault weapons) have been getting most of the press lately, but the real killers in this USofA are hand guns.  Lots of people have them.  Most of the people they kill are suicides, and, hence, don't catch a lot of attention.  If you're not especially important, blowing your brains out will bring very little publicity.

There are three reasons to own a hand gun.  One, of course, is for criminal activity.  Hand guns are excellent tools for gang assassinations, convenience store stick-ups, and such like.  Another, as noted above, is self-annihilation — although that probably was not the original motive for buying the damned thing.

The third reason to own a hand gun is fear.  FDR thought all of us ought to enjoy "freedom from fear," but that never happened.  What if that other comes to my house, and wants to kill me.  Shouldn't I be prepared to blow him (possibly her) away?

Me, I'm not afraid.  The worst that might happen, unlikely as it seems, is that I get killed by somebody who thinks that my household "wealth" is worth a murder.  That somebody, for sure, is a total asshole.

Personally, I don't see any reason for hand guns to be legal.  Frankly, I'm not especially agitated about assault weapons.  If you want to plink at paper targets with a hand weapon, a pellet gun ought to do the trick.  Those beebees  will penetrate the paper every bit as well as as a much more expensive bullet.  A shotgun will discourage your home invader a whole lot better than your Glock will.

I'm tired of fear.  It's time for freedom from fear.  Screw the "assault rifles."  Let's get rid of hand guns.  All of them.
Posted by the view from vicworld at 12:10 AM No comments: 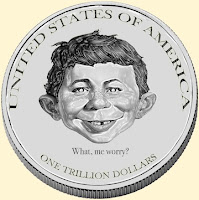 It is nice to see Obama showing strength, and, at long last, refraining from negotiating with himself.  Tea Party types like Ted Cruz are not responding to pressure from the business community, but I suppose there still is hope.  After all, Congress remains something of a millionaire's club, and the members' own portfolios would be battered by the market chaos that is likely to follow a default.  Maybe Obama can pull this one off.
Posted by the view from vicworld at 2:39 PM No comments:

The general public seems to believe that what Bernanke called "the fiscal cliff" (and Krugman called "the austerity bomb") has been averted.  It hasn't, of course.  Sequestration and lifting the debt ceiling were kicked down the road a couple of months, but nothing, really, is settled.

During his first term, Obama seriously sought a "Grand Bargain" on tax increases and spending cuts with John Boehner — but Republicans, possibly convinced by too rich a diet of Fox News, declined, thinking they could take the Presidency and possibly the Senate as well in the 2012 elections.  Well, they were wrong.

The problem now, though, is that Obama still wants a "Grand Bargain," and probably still is willing to make entirely too many concessions on what currently are called "entitlements," but which used to be called "the social safety net."  (Yes, the progressives let the conservatives select the lexicon again.  When Republicans talk about "reforming entitlement programs," what they mean, really, is "shredding the net.")

Well, there are some changes that could be steps in the right direction.  The salary cap for FICA contributions could be lifted — or, better yet, entirely eliminated — to build the Social Security trust fund.  Since that trust fund may be invested only in government bonds, perhaps the Fed could create a new instrument — available only to the trust fund — that actually pays a little interest.  Since the Fed creates money out of thin air, it wouldn't cost taxpayers a cent, so beefing up the trust fund would not have any negative impact on the general economy.

What Medicare needs more than anything is what insurers call a more favorable experience rating — that is, it needs more members paying in who need less health care.  Hence, it makes no sense at all to raise the age of eligibility to 67, since the youngest members use the fewest services.  What should be done is to open up Medicare coverage to much younger participants.  The best way I can see to do that is to allow Medicare to compete against the private companies on the Affordable Care Act exchanges.  Uh huh, that good old public option — but there's no doubt it would cut costs.  The real solution, of course, is single payer for all.  Don't miss Eduardo Porter's column in yesterday's Times!

Needless to say, eliminating corn subsidies and the corn-based ethanol requirement for gasoline would free up a lot of money for food stamps, and raising the minimum wage to a living wage would help increase all kinds of tax revenues while reducing income inequality.  Yes, prices might have to rise, but poorer people tend to spend whatever extra income they receive, boosting sales.  That means more profits for (real and alleged) small businesses, and more employment.

I could go on, but why bother?  None of the above will happen.  After all, as Will Rogers said, "We have the best Congress money can buy."
Posted by the view from vicworld at 5:44 PM No comments:

A decade or so ago, it seems that Chuck Hagel — whose name currently is under serious consideration for Secretary of Defense — said something unenlightened about gays in the military.  Big deal.  For Christ's sake, he's a Republican.  What did you expect?

More important, Chuck Hagel is not in the pocket of the Israel lobby.

If Our President goes ahead with his nomination, I'll feel a lot more comfortable about the upcoming second term.  More impressively, he could come out of right field and nominate Susan Rice, despite her "withdrawal" from the fray, as Secretary of State.

In the meanwhile, Obama says he will not "negotiate" the debt limit.  Will he let the Republicans in the House spitefully destroy the American economy?  And, will they actually go ahead and do it?  Who knows?

I think Hagel is okay.  I like his reluctance over Iraq, and his foot dragging over taking military action against Iran.  I also like the ideas of Barney Frank taking John Kerry's Senate seat for the interim, and Boehner struggling to keep the Speakership.

Of course, nobody knows what the hell Obama will do.  Now in his second term, people say, he might be different.  Then again, he might not.

Posted by the view from vicworld at 8:07 PM 1 comment: