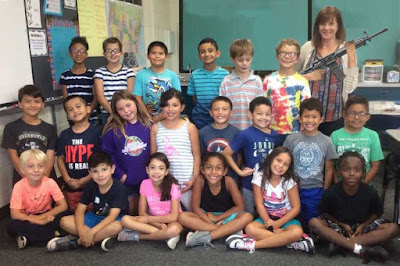 I was doing a mental inventory of my colleagues over thirty years of teaching, considering which of them might be willing to pack heat in the classroom and which could be trusted to do so.  The categories don't intersect.  Granted, I didn't work in Idaho or Kentucky, but even in such gun-friendly places, I doubt the circles of the Venn diagram would overlap.

There will be volunteers, of course: some teachers will volunteer for anything that pays an additional stipend.  There will be training, probably by local sheriff's deputies — but even if the teacher volunteers refrain from grading papers during the PowerPoint presentations, the whole idea of turning educators into a sweater-vested SWAT team is absurd.

Given the suicidal nature of school shooters, arming teachers will have no deterrent effect: some shooters might welcome the "extra challenge."  We need to ask more questions about whom the "guardians" might end up shooting in a "combat" situation.  Do Our President and his NRA anticipate running gun battles?  Real life is neither an action movie nor a video game, and it is terrifying to think about what might happen in those states already enacting legislation to arm school personnel.

I have no problem with those who own guns for hunting or target shooting, but I'm sure they could manage quite nicely using bolt-action rifles and shotguns.  By contrast, people who own hand guns and semi-automatic rifles for "self-defense" all too often share a characteristic that should preclude gun ownership: unhealthy levels of fear.  It doesn't matter whether they fear home invasion, street crime, or a government imposition of shariah law: their fear inevitably makes them less rational.  We don't need people who are both armed and irrational in our schools.

Posted by the view from vicworld at 1:17 PM No comments:

Gun politics
The manufacturers of the "Bumpstock" profited mightily from the free advertising provided by Stephen Paddock, the Las Vegas shooter; but now that sales have dropped off again, Our President is willing to consider a ban.  Whoopie.  Wayne LaPierre of the NRA says those who support gun control are "socialists" — but, apparently, not Maoists, who believe that "political power grows out of the barrel of a gun."  I don't believe those wonderfully articulate young socialists from Marjory Stoneman Douglas High School will change any Republican votes on gun control, but I feel certain they are helping themselves by channeling their grief and trauma into activism.

Tsuris for Bibi
It looks like years of corruption accusations finally have caught up with Bibi Netanyahu as his co-conspirators prepare to turn state's evidence against him.  Nevertheless, an impending indictment won't interrupt his plans to attend the AIPAC conference in Washington starting March 4, and to meet with Tr*mp for the fifth time.  AIPAC, which always has represented not Israel but Likud, will greet Bibi with cheers.  Tr*mp and Netanyahu can commiserate, and nobody should be surprised if Tr*mp recycles the comment he made about Rob Porter: "He says he's innocent."
Posted by the view from vicworld at 11:56 PM No comments:

Rob Porter
You would think one would cease to be amazed by how the Tr*mp White House can turn what should have been an easy executive decision into a fiasco.  Even if Kelly and company decided to take their chances on a wife-beater for the sake of employing somebody less incompetent than the rest of the crew, they should have had plenty of time to cook up a coherent response for when the skeletons rattled the closet.  Oh!.. and has anyone asked Hope Hicks if she's still dating the creep?

Meanwhile, in Europe...
Southern Europe may turn out to be the big winner from the German election that put members of the far-right AfD party into the Bundestag.  It forced Angel Merkel to enter another coalition with the Social Democrats, the SPD — but this time the SPD will control the finance ministry. and the austerity obsessed Wolfgang Schaeuble will be gone.  Southern Europe still needs stimulus; and that now may be possible.

And in Israel...
One wonders if part of the motivation for recent Israeli bombing in northern Syria was to inspire patriotic support for Bibi Netanyahu, currently facing corruption charges.  Also, one wonders if US recognition of Jerusalem was a Trump/Kushner political gift to Bibi, intended for the same purpose.  Of course, such speculation may be wrong, even though it feels so right.

Posted by the view from vicworld at 9:49 PM No comments: 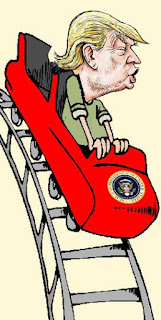 Something everybody seems to be forgetting at the moment is that the FISA court was created specifically to add a veneer of "due process" respectability to the desire of Federal agents to spy on anybody, anywhere, for any purpose whatsoever.  Although created in the post-911 panic, nowhere in the authorizing legislation does it say that the subject of intrusive surveillance has to be named Mohammed.

Getting the FISA court to issue a warrant is easier than getting the proverbial grand jury to indict the proverbial ham sandwich — there's nobody there to oppose the warrant, it is assumed that the warrant is, well, warranted, and the judges want to go to lunch.  If there isn't a big rubber stamp to mark "APPROVED" on every application, it's just another example of gross government inefficiency.

Carter Page, notoriously sleazy, might have justified a warrant by reputation alone.  Personally, I still don't see why the Russians would have needed Republican help to interfere in our election, although compromising some idiots in the Tr*mp campaign probably was just too easy a proposition to pass up.  The cover-up, as usual, is likely to be worse than the crime.

Posted by the view from vicworld at 9:50 AM No comments: