Tr*mp's "foreign policy" consists of listening to "his" generals.  The generals want another 5000 troops to "stabilize" the country — not to win, mind you — we couldn't win with Obama's far larger "surge" — but just to delay losing the war until they're all "honorably" retired.  Who knows?  It might even lead to a round of negotiations!

Attempts at negotiation to date have been fruitless, largely because neither side seems to have much to offer the other.  Well, it's time to think outside the box.  Here are some ideas that just might work:

• Afghan government will be decentralized, with regional chieftains and warlords retaining their local power and meeting in a traditional loya jurga to make decisions that affect the nation as a whole.

• All foreign forces will leave Afghanistan, with Afghan leadership committing to subdue or expel foreign Islamist forces, including IS and al-Qaeda.

• NATO nations will contract to purchase the entire Afghan opium crop, thereby maintaining the Afghan economy and sharply reducing the availability of opioids on worldwide markets.

• Afghanistan will contract with multinational corporations based in NATO countries to exploit its deposits of rare earths and other minerals, creating cash incentives for all parties to the negotiations.

• The West will commit to end all efforts to influence Afghan religious practices, and let the Afghans handle their own political corruption problems in whatever ways they see fit.

A general consensus has emerged that "nation building" does not work, and that attempts to foment cultural revolutions in the Third World create nothing but chaos and antagonism.  If the West can live with Saudi Arabia under Sharia law, it can extend the same courtesy to Afghanistan.  Cultures change at their own rates, each in accordance with its own needs.

I'll pick up my Nobel Peace Prize in person, provided I can fly first-class.
Posted by the view from vicworld at 12:43 PM No comments:

Middle East
Islamophobic?  Not Tr*mp!  The biggest difference between Sunni and Shi'a, it seems, is $110 billion in military contracts.  Okay, absolute despots who quietly finance radical jihad may not be the nicest people in the world, but why let a few little human rights get in the way of a sweet deal? Meanwhile, the Iranians were putting unprecedented pressure on their own religious radicals in a exercise of something that looked a hell of a lot like democracy.
(Breaking fake news!!! The "prayer note" Tr*mp slipped into the Wailing Wall said, "No politician in history, and I say this with great surety, has been treated worse or more unfairly.")

Budget
The President's budget proposal is understood as an opening bid in a negotiation, designed to lower the adversary's expectations and leave room for expected "giveaways." The Tr*mp document is so extreme that a "compromise" could wind up looking like Paul Ryan's wet dream. The objective of every Republican since Reagan has been to further fatten the fat cats while thoroughly screwing everybody else.  Tr*mp, the alleged "populist," continues the tradition — in spades.

Turkey
Even Erdogan's goons attacking Kurdish and Albanian protesters in downtown DC failed to draw press attention to the extension of "emergency powers" in Turkey in the service of political repression. One can only hope that a criminal investigation into Michael Flynn's employment by Turkey will draw a little more attention to the ongoing decimation of Turkish democracy.  Erdogan paid Flynn a lot more than the Russians did.
Posted by the view from vicworld at 10:24 AM No comments:


You won't actually need any hard evidence to believe this, will you?  Oh, good!  I didn't think you would.

So the usual sources are blaming North Korea for the WannaCry ransomware attack, a reflex response when they can't think of anything better.  I can think of something better!  First, let's review the "facts" that have been made available.

The attack exploited a vulnerability in Windows first discovered by the NSA, then "mysteriously" leaked on the darkweb.  Microsoft promptly released a patch to block that vulnerability, which was automatically downloaded and installed on the newest version of its operating system, protecting all those who had paid for the software.  The scale of the attack was unprecedented, as was the publicity surrounding it.  Almost none of those targeted have paid the suspiciously low ransom to have their data decrypted, possibly because the scale and publicity of the attack makes it seem unlikely that the hackers ever would keep their promises to the victims.

So who's been hurt?  Well, there were those using older versions of Windows, like the British National Health Service — starved for cash under the Conservatives, and still limping along on Windows XP for want of money to pay for an update.  Then there were the vast numbers using pirated versions of Windows, especially in Russia and China, whose systems couldn't download the patch.  Also, presumably, there was a tiny fraction who had paid for the latest version of Windows but had the automatic update feature off.

Now, as they like to say in Latin, cui bono?  Who benefits from a worldwide attack, especially considering how all of the ransom money actually paid is still sitting in inactive Bitcoin wallets?  Who, perhaps, has been royally pissed off because of all the piracy of Windows software, and not terribly pleased with those who figure they don't need all the bells and whistles of Windows 10?

Microsoft had access to all the code involved; Microsoft's good customers had the patch in advance.  Just one more step is necessary: if it turns out that you can recover all your data just by buying and installing the latest version of Windows, well . . .

This conspiracy stuff is fun! 😈

Posted by the view from vicworld at 1:25 AM No comments:


Despite the past week's avalanche of insanity; despite all the claims, counterclaims, and contradictions; despite a truly extraordinary display of administrative disorganization and incompetence; it's not that hard to understand what's happening in Tr*mpland.

The Russian Connection
It is impossible to say just how much impact Russia had on November's election, but one thing is certain: nothing Russia did required collusion with the Trump campaign.  Neither Paul Manafort, nor Roger Stone, nor Erik Prince, nor Michael Flynn, nor Jeff Sessions, nor any other Tr*mpista had anything to contribute to the hack of the DNC's email or the flood of damaging fake news.  Russia needed no assistance from Tr*mp associates.

This is not to say Russia had nothing to gain by arranging meetings with individuals close to Tr*mp.  Any less-than-public contact with people close to the campaign made those individuals susceptible to blackmail, and gave Putin a tool to pressure the new American administration if Tr*mp happened to win.

Tr*mp happened to win.  Did he even know some of his minions were canoodling with the Russkis?  It doesn't matter, nor does it matter that nothing that happened in their meetings could have had any impact on the election.  In politics, appearances are everything.

Everything in Rod Rosenstein's memo criticizing the FBI director was true, and largely echoed Democratic critiques.  Comey probably deserved to be fired — three months ago — but not even Tr*mp's loyal base is gullible enough to believe that the Clinton email fiasco had anything to do with Comey's sudden departure.

More revelations about the Russia connection are sure to emerge, no matter who is confirmed to lead the FBI.  Comey was fired not to prevent more revelations, but to better control how they are made public.  Tr*mp wants a loyalist as director, someone who will minimize the ensuing damage.  (Rosenstein should start updating his résumé ASAP.)

Lock him up?
It is very unlikely that Tr*mp's dismissal of Comey will constitute obstruction of justice.  Proving obstruction of justice would require demonstrating Our President's state of mind when he made his decision, and Tr*mp's mind, to date, has proven so disjointed as to be unfathomable.

At the rate he's going, though, Tr*mp may achieve lame duck status faster than any president in history — possibly even before the 2018 Congressional elections.
Posted by the view from vicworld at 10:46 AM No comments: 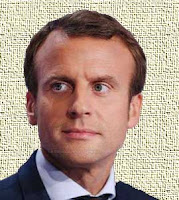 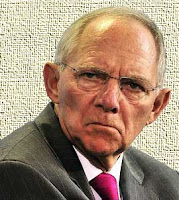 Needless to say, those of us who are not fascists were quite relieved by Emmanuel Macron's substantial victory over Marine LePen in the French election.  It is understandable that many on the French left were uncomfortable supporting a banker/financier, but despite the refusal of Jean-Luc Mélanchon to endorse his centrist rival, most progressives managed to overcome their misgivings.

One voice of the left who is quite positive about Macron is Yanis Varoufakis.  You may remember Varofakis as the Greek envoy to the EU for bailout talks a couple of years ago.  He resigned as finance minister to Prime Minister Alexis Tsipras when Tsipras caved in to German demands that Greece accept yet another round of austerity in return for loan "renegotiation" — in essence, accepting who knows how many more years (still counting) of Greek suffering for the sake of staying in the Eurozone.

The architect of European austerity was German finance minister Wolfgang Schaueble.  Austerity measures have provided moralistic gratification to northern European Protestants raised on the fable of the grasshopper and the ant; but, more importantly, they make it possible for German and Dutch banks to avoid writing off a lot of bad loans to southern Europe.  When Varofakis opposed more austerity, he had an important ally: Emmanuel Macron.  Macron resigned from François Hollande's government at about the same time Varofakis resigned from Tsipras's.

Only aggressively stimulative economic action will do anything to alleviate double-digit southern European unemployment, and Italy and Spain have suffered under austerity almost as badly as Greece.  Perhaps Macron will shift the balance of power in the EU away from Germany; perhaps the French will accept some softening of their ironclad job protections in exchange for a great many more job opportunities.  Upcoming contests for seats in the French Parliament are likely to determine just how much or how little Macron can accomplish.

Posted by the view from vicworld at 5:04 PM No comments:

Surprising his State Department, Our President got it into his head to invite the irrepressibly murderous Rodrigo Duterte for a White House sleepover.  To Tr*mp's surprise and chagrin, I'm certain, Duterte said he might be "too busy" to come over and play.

So what is it with Tr*mp and his passion for authoritarian bad boys like Duterte, al-Sisi, Ergogan and, of course, Vladimir Putin?  Hell, he was even saying nice things about North Korean meatball Kim Jong-un the other day!  Is it time for our Secretary of Housing and Urban Development to have a peek at the Presidential brain?

It's hard to believe there isn't something psycho-sexual involved in Tr*mp's bizarre infatuations, uncomfortable as it may be to entertain the imagery afflicts the imagination while entertaining such thoughts.  Fred Trump, one imagines, was the kind of father who could generate psychiatric fortunes over the generations — except that none of his sons ever could be so weak as to need a therapist.

I hope we don't have to bomb the Philippines.


*   *   *   *   *   *   *
More shit, quoted from the Times:
In a discussion last year about the cost of the Marines in Darwin, The Australians came in with a data-heavy presentation asserting that United States Marines eat more that typical Australian soldiers, and therefore strain sewage systems more, and argued that the Americans should pay more of the costs of improving wastewater lines on military bases.
Posted by the view from vicworld at 10:48 PM No comments: