I have absolutely nothing to add to this brilliant analysis by Stephen Marche, which recently appeared in The New York Times:


The Unexamined Brutality of the Male Libido

Posted by the view from vicworld at 4:49 PM No comments:

Tr*mp to Kurds: F*ck you


So, the Russians, the Iranians, and the Turks sat down in a room to "resolve" the civil war in Syria.  Needless to say, the chief objective of the Russians and the Iranians is to keep Bashir al-Assad in power.  Turkey, a purported NATO "ally," is anxious to cooperate with Iran to achieve its own most cherished goal: suppression of the Kurds. 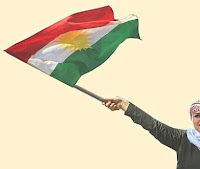 The Kurds have been America's only dependable ally in both Syria and Iraq, and were instrumental in reclaiming territory from the Islamic State.  They are the only force now standing in the way of Assad exercising complete control over Syria.  According to the Washington Post, when Turkish strongman Recip Tayyip Erdogan asked Tr*mp to stop providing arms to the Syrian Kurds, Tr*mp's response was, "Sure, buddy!  Anything for a pal!"

Tr*mp, of course, admires Erdogan's style of leadership; but America's stubborn loyalty to an undeniably autocratic Erdogan seems to have just one real objective: maintaining the US presence at Incirlik Air Base in Turkey.  To do that, both the Administration and military leaders seem willing to empower both Iran and Russia.  Iranian client Hezbollah appears to have solidified control over Lebanon, Iranian ties to the al-Abadi regime in Iraq are stronger than ever, and we can assume Russia's military occupation of Syria will expand: without US support, Kurdish control of northern Syria is doomed.

Now that Erdogan has destroyed the secular legacy of Ataturk, the Kurds are the only ones in the region willing to keep government separate from the practice of Islam; and even though Turkey is Sunni and Iran is Shi'a, Erdogan and Rouhani see no impediment to uniting against the Kurdish "threat."  Haider al-Abadi will happily join the club, anxious to gain control of Kurdish areas of northern Iraq.  America's fourteen-year investment of lives and money in Iraq will have been entirely wasted.

The Kurds, after a century of oppression, deserve to have an independent homeland; and it is in the best interests of the US that they succeed in their quest.  Deserting them now only means more regional power for Russia and Iran, and diminished US influence in the Middle East.
Posted by the view from vicworld at 5:26 PM No comments:

The Senate Foreign Relations Committee has been giving some thought to the disturbing fact that Donald Tr*mp has the power to order a nuclear first strike against North Korea — or, perhaps, Venezuela or Iran or Nigeria (having confused it with Niger.)  Senator Ed Markey of Massachusetts has proposed legislation that would limit that power to attacks on countries upon which Congress had declared war.

Mutually Assured Destruction (MAD) protects the United States against nuclear attack just as well today as it did when the Soviets first acquired the bomb — better, since now we can respond with submarine-based missiles even if our ground-based capacity is destroyed in a first strike.  That also means no other country would risk involvement should Our President get it into his head to lob one at Pyongyang.  Kim Jong-un really does need his own bombs and delivery system.

The utility and safety of our submarine-based capacity also makes our ground-based missiles unnecessary and obsolete.  It certainly is not worth replacing them, as proposed, at a cost of $100 billion.  The submarines also make it possible to delay a response to an attack — long enough so that the decision does not have to be made by one person.  The choice to engage in nuclear war, at the very least, should be a decision by a nonpartisan group of trusted individuals.

Yesterday, Gen. John Hyten, head of US Strategic Command, said he would disobey an "illegal order" from the President to launch a first strike.  It's a nice sentiment, but the Air Force Academy at Colorado Springs produces plenty of graduates who are both military leaders and Christians eagerly awaiting the Apocalypse.  No matter what Hyten would do, somebody would obey joyfully if an apocalyptic command came from Tr*mp.

Posted by the view from vicworld at 8:39 PM No comments:

Can the Middle East get even worse? 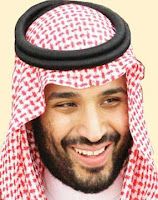 Sure it can — and the cheerful young man you see here is just the one to bring that about.  Now apparently in complete control of Saudi Arabia, Crown Prince Mohammed bin Salman already has exacerbated regional turmoil, and promises to do more.

For the past four decades, Saudi Arabia was stabilized by oil revenues, religious authority, and gerontocracy.  MbS, as he's known, aims for continued stability, with special emphasis on the stability of monarchical rule.  He very much enjoys being the man in charge — of everything.

Admittedly, keeping Saudi Arabia stable will not be simple for anybody, direct descendant of Ibn Saud or not.  MbS needs to diversify the national economy away from oil and gas while engaged in a complex contest for power with Islamic authorities.  Ultraconservative Islam has been the foundation of his family's rule, but also its most significant rival for power.  Attempts to relax the Kingdom's medieval interpretation of Sharia Law are met with powerful opposition.

The greatest potential for making things "even worse," though, arises from MbS's efforts against regional rival Iran.  After over two years of war crimes in Yemen (with US collusion) and spending many times what Iranians give Houthi rebels, he has produced what the UN calls the worst humanitarian crisis on Earth, and no sign of resolution of the conflict.

Nobody doubts considerable Saudi pressure on Saad Hariri when he announced his resignation as Prime Minister of Lebanon from Riyadh, nor that the move was intended to delegitimize Iranian ally Hezbollah's role in Lebanese government.  Apparently, MbS thought the pleasure of sticking a finger in Iran's eye was worth the risk of the Syrian Civil War spilling over the border into Lebanon.

The boycott and blockade of Qatar continues, punishing the Qataris for the sin of conducting diplomacy with Iran, with which they share vast natural gas reserves under the Persian Gulf.  The pure, spiteful pique involved is positively Tr*mpian.

Actually, it was just after a sleepover party with First Boy Jared Kushner that MbS seized all police power for himself and had about two hundred potential rivals arrested, including the oft-mentioned eleven princes.  The White House is quite fond of MbS, who exercises the kind of arbitrary authority Our President wishes he could have for himself.  In return for American support, we can expect MbS to weigh in on upcoming Israeli-Palestinian "negotiations," pressuring the Palestinians to accept whatever Bibi deigns to offer them.  (The Tr*mp "negotiating team" consists of three Orthodox Jews and a Coptic Christian.)

Saudi Arabia has potential as a manufacturing center because of its energy resources — including a huge and uninterrupted supply of solar when the oil runs out.  All MbS will need is a reliable pool of cheap labor.  Saudi men are unlikely to take those jobs, so "progress" in allowing women to work outside the home is a strong possibility, provided religious authorities can be brought along.  Failing that, there are bound to be plenty of impoverished Palestinians in the neighborhood.
Posted by the view from vicworld at 9:06 PM No comments:

It was never a convincing argument, but now we're hearing it again: reduce their tax load, and businesses will create more jobs and pay more in salaries.  It's never happened, and it never will.

Businesses expand based on increased demand for their products; demand increases when consumers (read workers) have more money to spend.  In the absence of increased demand, businesses sink extra cash into stock buybacks, shareholder dividends, and executive bonuses.

Right now, American corporations have a lot of extra cash just sloshing around, providing no economic stimulus at all.  They don't need more cash; they need more affluent customers.  The Republican tax plan may provide a fleeting infusion of cash into some middle-class wallets, but most of the $1.5 trillion addition to the national debt will wind up in the pockets of the very rich — as usual.

Still, there are some features of the plan that make good economic sense: most notably, the cap on mortgage interest deductions.  It is hard to justify subsidizing the McMansions of the "comfortably well-off," their claims to middle-class status notwithstanding.  Builders will complain – McMansions are much more profitable than the kinds of homes families earning less than six figures might afford – but an impetus for builders to provide more affordable starter homes and fewer rococo monstrosities is long overdue.
Posted by the view from vicworld at 11:36 AM No comments: