The Mueller report finds no evidence of collusion, and I can't say I'm surprised.  Here's what I wrote back in July of 2017 regarding the notorious "Tr*mp Tower meeting":

This doesn't mean Putin lacks kompromat on Our President — and I don't mean the "piss tape."  The Republican base has shown itself totally willing to ignore Tr*mp's sexual peccadillos, and paying hookers to pee on a bed isn't even a crime.  Money laundering, on the other hand, is a crime, and developers of high-end real estate are especially well-situated to participate.  Ongoing investigations of Deutche Bank just might turn up evidence that does some real damage to our Grifter in Chief — albeit most Americans can't comprehend financial crimes much more complex than bank robbery.

In the meanwhile, Our President can chalk up a victory — a victory that will make it far more difficult for Democrats to use future investigatory revelations to their political advantage.  The disappointing fact is that  Tr*mp never was a "foreign agent" — he's just one more corrupt businessman willing to make a quick buck.

Posted by the view from vicworld at 1:00 PM No comments:

Q.  Was anybody even remotely surprised by the recent college admissions scandal?

Q.  Why would a coach at an important school want to take a bribe?

A.  Jealousy, pure and simple.  Resentment of the salary pulled down by the football coach.

Q.  If the kids were chronic "underachievers" even with all the private tutoring and fancy private schooling their wealthy parents must have given them, how did their parents expect them to graduate from a top-tier school?

A.  They were paying full tuition — of course they were going to graduate.  It's much harder to get into a top school than it is to graduate from it.

Posted by the view from vicworld at 11:25 PM No comments:


Anybody who came of age during the Cold War will remember "red-baiting" — the practice of tarring liberals and their ideas with the brush of "communism."  Needless to say, "communism" and "socialism" were used interchangeably; so even a popular socialist program like Medicare (1966) was attacked as a threat to "democracy" by "the red menace."

Red-baiting died down somewhat with the collapse of the Soviet Union, but if you're too young to remember it at its worst, don't worry — because it's back, and likely to play a major role in the 2020 election cycle.  It was the central thrust of the President's recent speech to CPAC, and most of his party already is on-board.

The new red-baiting may be a good sign: an indicator that socialist ideas have become thinkable again.  The “Green New Deal,” “Medicare for All,” and free higher education are mainstream ideas today, and steadily growing more popular.  There is reason to hope that red-baiting will be far less effective in today’s politics than it was in the past.

Posted by the view from vicworld at 1:20 AM No comments: 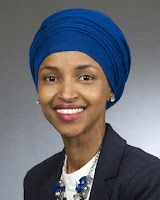 Posted by the view from vicworld at 9:57 PM No comments: