✪ The decision by Congress to allow families of 9/11 victims to sue the government of Saudi Arabia may lead to lawsuits against the US for consequences of CIA and military activities; I'm fine with that.
✪ Investigators have provided extensive proof that a Russian Surface-to-Air Missile was responsible for the downing of a Malaysian airliner over Ukraine; uh huh.
✪ Speaking of SAMs, isn't it time to start providing shoulder mounted SAMs to the Syrian rebels, even at the risk of them getting into the hands of Fateh al-Shah (al-Nusra)?
✪ To the dismay of vestigial Blairites, Jeremy Corbyn continues to lead the Labour Party sharply to the left; so, whither the Democrats?
✪ So now Peres is dead, along with Rabin, Arafat, and the Oslo Accord; Nobel prize points for trying, I guess.
✪ David Wildstein's testimony at the Bridgegate trial of Christie toadies Baroni and Kelly continues to provide a laugh a minute as corruption in state and local politics scarcely takes a breather; up next, the Cuomo administration.
Posted by the view from vicworld at 5:29 PM No comments:

For most of the American public, watching a presidential debate is a lot like watching a foreign movie with no subtitles: it's not what you say that matters, it's how you say it, and the overall impression you leave.  Hence, there is no reason to parse the candidates' words for meaning, much less to fact-check.

Clinton, as usual, left the viewer uninspired — she is not one to stir anything resembling a strong emotional response.  On the other hand, she was cool and willing to poke a few needles when the situation arose.  We saw no sign of weakness, so the net effect seemed positive.

One supposes Tr*mp's constant interruptions were intended to demonstrate strength, but they just came across as bad manners.  His insistence that the news media lied when they reported the chronology of his attitudes towards the Iraq war or his role in the birther campaign came across somewhere between bluster and paranoia.  The net effect, in my estimation, was negative.

So, my feeling is that the debate's impact on that substantial block of voters who dislike both candidates may have nudged the needle slightly in Clinton's direction — or, more accurately, further away from Tr*mp.  We'll just wait and see.
Posted by the view from vicworld at 6:52 AM No comments:

Will Lester Holt ask Hillary about the Clinton Foundation "scandal?"  One certainly hopes so.  It would provide an opportunity for Hillary to contrast it to the Tr*mp Foundation, which has worked assiduously for the benefit of… you guessed it… Donald J. Tr*mp.

Disregarding the illegal Pam Bondi contribution, which may or may not have influenced the Florida Attorney General to drop a lawsuit against Trump University, there's plenty to talk about.  According to reporting in the Washington Post, contributions from his foundation were used to settle obligations incurred by Tr*mp in at least two lawsuits.  Then there were the two portraits of Tr*mp that were "donated" to… you guessed it… Tr*mp.

Another "contribution" went to Citizens United Foundation, to help finance a lawsuit against New York Attorney General Eric Schneiderman, who just happens to be suing on behalf of defrauded Trump University students and also launching an investigation of… you guessed it… the Tr*mp Foundation.

Since the Tr*mp Foundation has no website, it's hard to figure out where its money goes — or even where it comes from.  It hasn't come from Tr*mp himself since 2008, but wrestling promoter Vince McMahon kicks in annually; nobody seems too clear on just why, and McMahon isn't talking.  Much of what Tr*mp does disperse to charity is in the form of "free" rounds of golf at his Mar-a-Lago golf club, valued at an average of $2,500 per foursome — but only after the charity has paid $250,000 to the club for hosting their event.

Like Bernie, I'm sick of hearing about the "damned emails."  The Clintons donate about 10% of their annual income to charity, and get no personal benefit from the Clinton foundation.  Tr*mp donates… errr… well, maybe we'll find out if he ever releases his tax return.
Posted by the view from vicworld at 1:59 AM No comments:

Since I don't use Twitter, I'm a bit behind on my conspiracy theories, so I'm not sure what's out there regarding Saturday's bombing in Manhattan.  Just in case there aren't enough, I figured it might be amusing to formulate my own.

Ever hear of Tannerite?  Hardly anybody has, except for people who operate shooting ranges, where it is used to create exploding targets that add an extra thrill for those who enjoy shooting things.  As it happens, Tannerite was the explosive used in the pressure cooker bomb that injured 29 pedestrians on 23rd Street in Chelsea.  Who would think of using Tannerite, other than NRA operatives working to advance the presidential ambitions of Donald J. Tr*mp?

It makes perfect sense, especially given the enthusiastic response to the bombing from Tr*mp himself, lapdog Chris Christie, and others.  Clearly, they suggest, the bombing calls for expanding the police state and heightened persecution of American Muslims!

Like all conspiracy theories, mine is based on the flimsiest of evidence.  Well, who cares?  Please do your best to spread it far and wide!

Later:
Now that we know the bombs were planted by a Muslim chicken-fryer from New Jersey, do I apologize?  Of course not!  In the true spirit of conspiracy theorists, I double down!

Obviously, the guy the police shot and arrested was contacted and mock-radicalized by agents of the NRA, who provided him with the Tannerite and persuaded him to bomb the Chelsea area, which is full of Democrat hipsters, and even has the same name as Hillary's daughter!  This new information only serves to strengthen my original argument!  Could it be any more clear?

I ask anybody who already started spreading my theory to get back on Twitter and make any necessary clarifications.  This is no longer a theory!  Now, it's a fact!
Posted by the view from vicworld at 1:21 PM No comments:


Deplorables
They are deplorable.  They're not in a basket, though, so they can't be drowned like unwanted kittens.  They're spread out across the United States, Europe, the world — less like kittens than stray cats, who breed faster than they can be domesticated.  They are human beings who have been subjected to extremely rapid culture change, which creates extreme anxiety.  Human beings don't like change, and they don't like other human beings who seem to be agents of that change: immigrants, racial, religious, and cultural minorities, the LGBT community.  Lots of them can't even tolerate each other, but that's only human — and they're not about to change.

Native Americans
If the Dakota Access Pipeline were so safe, why was it relocated downstream from Bismark (90% white) to the Standing Rock Sioux Reservation?  Energy Transfer Partners, the company building the pipeline, says the project will go through.  Over a thousand Native Americans have travelled to Standing Rock to stop it — but also to remind America that they are habitually shafted.  The deplorables have been deploring Native Americans for several hundred years, and the result has been tragic.

Oh, Syria! (again)
Nobody really expected the latest cease-fire to come to much, and it hasn't, albeit a short vacation from the bombing certainly isn't bad.  A big part of the problem is that Fateh al-Sham (formerly al-Nusra) is the strongest and best organized of the anti-Assad groups; and the other anti-Assad groups, including those supported by the USofA, depend on its cooperation.  Now we want to cooperate with Russia to destroy it (along with IS), but it is so integrated with our "friends" that our "friends" are wondering just who we are supporting.
Posted by the view from vicworld at 9:01 PM No comments: 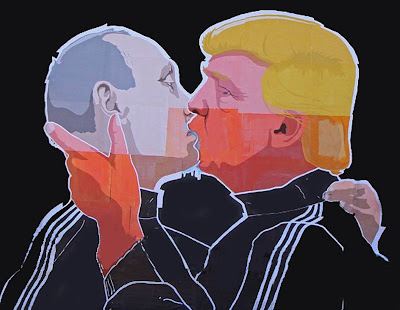 Painted on a wall;   Prague, Czech Republic
Posted by the view from vicworld at 9:14 PM No comments: