Obliged to juggle alternative realities on a daily basis, is it surprising that Mick Mulvaney was, shall we say, a bit confused?

Let's start a pool!  How long will it be before Rudy Giuliani goes under the bus?

Vladimir Putin is the only world leader likely to bring a semblance of peace to Syria.  If that happens, should he be considered for the Nobel Peace Prize?

We all know we're not supposed to judge people by their appearances, but sometimes you just can't help it!

Posted by the view from vicworld at 10:03 AM No comments: 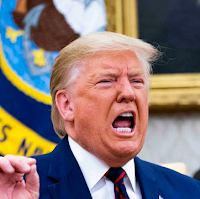 As I'm sure you've noticed, Our President is batshit crazy — and he's been getting worse.  As impeachment pressures grow, his general demeanor is deteriorating and his rants and rage-tweets are increasingly bizarre.  Up to this point, Republican efforts to rationalize Tr*mp's irrationality have been strained, but effective enough to mollify his base.  The Zelensky phone call opened some cracks in GOP unity– even at Fox News – but none large enough to do real damage.

The Erdogan phone call, however, is different.  Tr*mp's base may not understand much, but they understand treachery and betrayal; they recognize a stab in the back when they see it.  After years being told of the bravery and loyalty of the Syrian Kurds – consistent "good guys" in all the media – Tr*mp's abandonment of America's allies against ISIS has to feel like a gut-punch to his admirers.  Real damage has been done, and none of the President's arguments for American self-interest or realpolitik is likely to reverse it.

In other words, Tr*mp's chance at a second term took a serious hit over the past few days; and since a narrow win in the Electoral College looked like his best  path to victory, the situation is dire.  A serious drubbing by Democrats in 2020 will endanger Republican control of the Senate as well.  What's a Bible-thumping stooge of the plutocracy to do?

Here's an idea: sidestep that embarrassing impeachment inquiry and invoke the 25th Amendment. With all due sympathy for his "illness," dump Tr*mp and give the presidency to Pence.  Our Vice-President has kept a low enough profile over the past three years to maintain his undeserved reputation for moral probity.  He could win.

It won't happen, of course.  Pence doesn't have the chutzpah to start the ball rolling, and the sycophants, enablers, and co-conspirators in the Cabinet would be too terrified to follow through.  Still, should you happen to run into Charles Koch any time soon, pass the idea along: he just might like it.

Posted by the view from vicworld at 4:11 PM No comments: