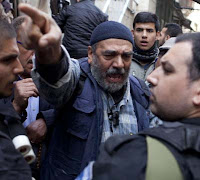 Posted by the view from vicworld at 2:35 PM 1 comment:

Peace talks
Turkey, Iran, and Russia (as a surrogate for Assad) have been discussing a plan to end the war in Syria.  It's an odd grouping, to be sure — they've been at each other's throats for decades.  In fact, they seem to have only one goal in common: preventing the establishment of anything resembling an independent Kurdistan.  Personally, I believe it is time for the USofA to stop toadying to the likes of Erdogan and Abadi and back the idea of a Kurdish state in Iraq and Syria — perhaps even with an eye towards parts of Turkey.  The Kurds are the most dependable friends we have in the region, and will remain so unless we betray them.

Nuclear Arms Race
If there is any more dangerous combination than belligerence, ignorance, and vanity, I can't think of it right now — although I suppose we should be grateful that Tr*mp, unlike many of his supporters, at least is not looking forward to the Apocalypse.

Settlements
I was pleasantly surprised when Obama instructed Samantha Power to abstain from, rather than veto, the Security Council vote condemning Israel's expansion of settlements on the West Bank.  It won't  make any difference on the ground, of course, but the president certainly must have enjoyed poking a parting stick into Netanyahu's eye.

The Berlin Aftermath
Angela Merkel's political future is looking dim, and so is the outlook for the EU.  Still, the waves of migration won't be stopped, driven by climate change and the brutal struggles for resources it foments.  As right-wing xenophobes come to dominate the West, any unified response to common threats seems less and less likely.
Posted by the view from vicworld at 11:32 AM No comments:

Apprehension tumbles into despair.  Despair is a poor response, albeit understandable in the face of so much shit.  A brief review of recent saprogenic events:

Cabinet picks
From a comment in the New York Times:


Let’s see, so far we have a guy from Alabama dedicated to upholding the fine Southern tradition of voting prevention heading up the Justice Department, an alleged reincarnation of Patton affectionately known as “Mad Dog” for defense secretary, a general who wants to expand the Al Qaeda terrorist training camp in Guantánamo for Homeland Security, a conspiracy theorist as national security adviser, a fast-food billionaire who opposes health care benefits and better wages as labor secretary, a guy with a plan to dismantle health care access as Health and Human Services, a neurosurgeon with zero leadership experience for Housing, a billionaire who wants to divert funds from public schools for Education, a climate-change denier from fracking earthquake country for the Environmental Protection Agency, an interior secretary who wants to sell off public lands and half of the top management of Goldman Sachs for the rest.
What could go wrong?

Conflicts of interest
If the President-elect fails to divest himself of his financial holdings, he will be in clear violation of the Constitution's Emoluments Clause.  The only legal remedy is impeachment by the House and conviction by the Senate.  Will it happen?  (The Magic 8-Ball says, "Don't count on it.")

Syria
The fall of Aleppo is a clear indicator that Assad, backed by Russia and Hezbollah, will win his war.  It is conceivable, though, that the Kurds can carve out and control a piece of the north, which has the potential to inspire an Assad-Ergogan alliance.  How would our president-elect respond?  Might a promise to end current efforts to change the name of Tr*mp Towers Istanbul influence his opinion?  (The Magic 8-Ball says, "Signs point to yes.")

Israel
Tr*mp's selection of David Friedman as ambassador to Israel signals the last gasp of "the two-state solution." A Tr*mp-endorsed Israeli annexation of the West Bank might have the unintended consequence of making clear that Israeli policy towards the Palestinians under its control is a policy of apartheid, and create international pressure to grant Palestinians full Israeli citizenship — possibly the best solution to seventy years of conflict. (The Magic 8-Ball says, "Reply hazy try again.")

Russian hacks
Did Russian interference deny Hillary the presidency?  There's no way to know, but Russophobia remains a conditioned reflex among many Republicans in Congress.  The "pivot towards Russia" may prove more difficult than Tr*mp and his heartthrob Putin anticipate. (The Magic 8-Ball says, "Ask again later.")

Death of a hero
Larry Colburn died this past Tuesday.  He was the last survivor of the three-man helicopter crew that intervened in the My Lai massacre, the 1968 atrocity that shook America's faith in its moral superiority.  Colburn testified against Lt. William Calley, the only man convicted for the slaughter of roughly 500 women, children, and elderly men.  Calley was sentenced to life in prison; he served three-and-a-half years under house arrest.
Posted by the view from vicworld at 12:56 PM No comments:

There's a lot of noise being made about the nomination of Exxon-Mobil CEO Rex Tillerson as Secretary of State, and his confirmation may be problematic.  Personally, I can think of quite a few candidates who would be a lot worse.  Say what you will, Tillerson is a pragmatist.  Some of his pragmatism at the helm of Exxon-Mobil certainly seems horrifying to those outside the company, but that same pragmatism enabled him to face down an assembly of khaki-clad religious bigots and persuade them that the Boy Scouts of America would be accepting gay members.

Tillerson just might be competent — unlike some other nominees for cabinet positions like unprincipled opportunist  Scott Pruitt, "slow kid" Rick Perry, and the frighteningly delusional Lt. General Michael Flynn.  Tillerson, though, may face opposition by some of the more Russophobic Senate Republicans.  If he fails to be confirmed, waiting in the wings as candidate for Assistant Secretary will be unrepentant neocon and rabid badger John Bolton (left), who did his best to destroy the UN when he served as W's ambassador there.

Call me paranoid, but I can't help wondering if the Tillerson nomination is a bait-and-switch.  Not only would his rejection just about guarantee the job to Bolton, it would be enough of a show of Republican "bipartisanism" to assure confirmation to all Tr*mp's other nominees.  Very scary!
Posted by the view from vicworld at 6:35 PM No comments:

In nominating Puzder, CEO of the Hardee's and Carl's Jr. restaurant chains, Tr*mp is not merely poking a stick into the eye of working people — he has opted for a hot poker.  A virulent opponent of any increase in the minimum wage, Puzder welcomes increased automation because machines are "always polite, they always upsell, they never take a vacation, they never show up late, there's never a slip-and-fall or an age, sex, or race discrimination case."  AFL-CIO President Richard Trumpka characterizes Puzder as "a man whose business record is defined by fighting against working people."

I strongly encourage anybody not already avoiding Hardee's and Carl's Jr. for the sake of avoiding the vast quantities of salt, fat, and calories that characterize the stores' menus to find alternative routes to obesity.  A boycott of Puzder's grease mills can be one more signal to Tr*mp and his plutocratic entourage that Americans refuse to roll over and play dead.
Posted by the view from vicworld at 12:22 PM No comments:

I meant to use this space for an uproariously funny, thoroughly ludicrous fake news story, but the competition was just too great.  How could anybody surpass the story about Hillary Clinton as leader of a pedophile ring operating out of a DC pizzeria?

Yes, I know we urban elites are supposed to stop characterizing Tr*mp's base as profoundly stupid and ignorant, but surely stupidity had a role in inspiring that North Carolina man with an assault rifle who invaded the Comet Ping Pong pizzeria last Sunday.  It's likely that stupidity also factored into a Twitter post by Michael G. Flynn, son of future National Security Advisor Michael T. Flynn, observing that the "Pizzagate" story should not be discounted until it was proven false.

You'd think that some of the urban elite types of the Tr*mp transition team might have discouraged young Flynn — given that he was one of their own — but somehow they got to it too late.  You'd also think they should have been forewarned, since both young Flynn and old Flynn spent a good part of campaign season spreading fake conspiracy stories.  Mikey G. was fired, but nobody around Tr*mp seemed especially embarrassed.

The latest "news" is that the gunman was an actor, hired by the Clintons to distract attention from all the child molestation going on behind the pizza ovens.  Plenty of people will believe that, of course, but heaven forbid we should characterize them as idiots.
Posted by the view from vicworld at 1:19 PM No comments:

I was looking for some No-Tr*mp news, which is hard to find these days.  Here's what I found:

Gambia
People who pay attention to such things were stunned last week when Yahya Jammeh, who has been president of Gambia for 22 years, not only lost an election but accepted the results!  This is the first time I can recall that a long-time African autocrat voluntarily ceded power.  Perhaps Mr. Jammeh decided he has looted enough cash for a comfortable retirement, but whatever his motivation, it is an extraordinary precedent.  Will 92-year-old Robert Mugabe of Zimbabwe follow suit? Not likely.

Austria
In Austria's election, Alexander van der Bellen soundly defeated neo-Nazi Norbert Hofer, to become Europe's first Green Party president -- despite Austrian concerns about Muslim immigrants.  Okay, he ran as an independent, not as a Green, but he still trounced the populist rabble-rouser.  Maybe that's a good sign for Angela Merkel.  It's certainly a good sign for the EU.

Italy
Alleged "populists" of both the Left and the Right rejected constitutional changes that would have "streamlined" Italy's political system by shrinking and weakening the Senate, and Matteo Renzi has resigned.  Personally, I suspect this reflects an Italian belief in the principle of "that government governs best which governs least," and that similarities to the US presidential results and Britain's Brexit are strained, at best.  Immigration was not an issue, and the Five-Star Party is not poised to take power.
Posted by the view from vicworld at 12:30 PM No comments: