Health Care
Tr*mp says, "I have to tell you, it's an unbelievably complex subject.  Nobody knew that health care could be so complicated."  Nobody?  Well, duh!

Voter Suppression
Our President had to stock his Cabinet with plutocrats, presumably because he just couldn't find enough wingnut ideologues — but he does have unreconstructed Confederate warrior Jeff Sessions, who has dropped the government's argument that the Texas voter ID law was designed to suppress minority voting.  Can the other plaintiffs win without the backing of the Justice Department?  We'll see.

Federal Budget
Congress never pays much attention to presidential budget proposals, so we can ignore Tr*mp's speech and just wait for Paul Ryan.  We are most likely to see yet another attempt at implementing supply-side economics, and need only look to Kansas to see how well that works.

Military Spending
It is obvious to the simple-minded that more military spending will "make America stronger" — except that it won't.  Fortunately, this particularly dumb idea would have to be funded with cuts to enough programs popular in the various states to ensure it won't happen.

Antisemitism
The cemetery vandalism will turn out to be the work of drunken young men, possibly wearing red caps; and the bomb threats not part of any organized plot, but individual acts inspired on 4chan or by the Daily Stormer.  This doesn't make the problem any less serious: antisemitism is an inevitable accompaniment to any kind of xenophobia, and enough empty threats might inspire some demented individual to attempt a real bombing.

Pay no attention to the man in front of the curtain!

Our President, like much of his "base," is profoundly ignorant.  Completely out of his depth, he will do what he must to maintain his pose as "the most powerful man in the world" — and any effort by progressives to remove him from office is the equivalent of trying to fire the Aflac Duck.

Behind the curtain are most of the usual suspects, jostling a bit, but largely willing to accommodate each other.  Congress is finding new ways to further enrich the plutocrats with tax cuts and banking deregulation, the religious right has put dibs on the courts, fossil fuel has Scott Pruitt, the white supremacists have Jeff Sessions, and the more generalized forces of darkness have Steve Bannon serving as Tr*mp's brain.

Yes, importers and exporters will come into conflict over trade policy, big agriculture will fight threats to its pool of slave labor, and foreign policy may devolve even further into chaos, but the "stakeholders" in the Tr*mp presidency largely will be gratified.  The only obstruction they might face is Tr*mp, whose need for approval and approbation just might gum up the political machine.

If anybody manages to force Tr*mp out of power, it won't be the left.  It is abundantly clear that most Republicans would be overjoyed if an opportunity arose to have Mike Pence in the Oval Office instead of their temperamental figurehead, but they don't have a way to accomplish that.  Trump is their most effective pitchman since Reagan — but unlike Reagan, he can't stick to the script.
Posted by the view from vicworld at 4:57 PM No comments:

By any rational standard, yesterday's Tr*mp news conference was bizarre — but what about by an irrational standard?  Was the Huckster-in-Chief effective?  From the perspective of his base, most likely he was.

In the meanwhile, the chaos has been chaotic indeed.  The Michael Flynn debacle was predictable, given the former general's in-your-face lunacy; and the "extreme vetting" proposed for immigrants apparently was not in place for a Labor Secretary nominee outed as a wife beater by Oprah.  Paul Ryan and Mitch McConnell have been wrestling with Tr*mpian pronouncements that keep sandbagging their legislative plans.

Tr*mp's admission that he didn't exactly read the Executive Order naming Steve Bannon to the NSC would have been breathtaking had it not been lost in the incompetent planning and execution of his seven-country refugee ban; and his aggrieved attacks on the court system are alienating every judge in the country, probably including Neil Goresuch.

Nevertheless, the Tr*mp "brand" remains strong among his supporters (even though they can't afford to buy Ivanka's merchandise), and I'm sure they enjoyed yesterday's attacks on the press immensely.  Okay, I know I'm supposed to show empathy for the red-hat crew.  I'm trying to empathize, really I am.  Does pity count?
Posted by the view from vicworld at 5:36 PM No comments:

One great consolation of senescence is that the memory of hard times past survives.  While younger people think of Tr*mpism as unprecedented, I have not forgotten "the Reagan Revolution."

Reagan conspicuously inaugurated his presidential campaign in Philadelphia, Mississippi, where three civil rights workers had been murdered in 1964.  He went on to slash taxes on the rich, decimate the labor movement, deregulate banking and industry, cripple environmental regulation, demean feminism, ignore the AIDS epidemic, shred the social safety net, double the military budget, finance third-world despots and their death squads, and preside over the glorification of greed.  His "base" was virtually indistinguishable from Tr*mp's: working class whites threatened by socioeconomic change.  Tr*mpian appeals to nationalism and the restoration of an imagined golden age — once known as "Morning in America" — inspire in this old man a powerful sense of déjà vu.

Reagan did immense damage; and one institution that suffered spectacularly was the Democratic Party.  Democrats responded to America's rightward lurch by empowering the Democratic Leadership Council, so-called "centrists" who led the party's stampede to the right during the Clinton years.  Only by comparison with Bill Clinton can Barack Obama be considered "progressive."  Obama came to power surrounded by the same Robert Rubin acolytes who guided Clinton era economics, and his social policy echoed rather than led cultural change that already was underway.  In the meanwhile, Republicans crippled Democratic power in Congress and in the States.

Right now, Democrats are confronting an existential choice: either continue the disastrous course of the Clintonian establishment, or line up behind populist progressives like Elizabeth Warren, Bernie Sanders, and Keith Ellison.  The next Chair of the Democratic National Committee will be elected at the DNC's winter meeting, February 23–26.  The leading candidates are the progressive wing's Keith Ellison and the establishment's Thomas Perez.

Only a genuinely progressive agenda can reclaim the support of the "Reagan Democrats" and revitalize the Democratic Party.  I encourage serious activists to put aside their Sharpies and poster board long enough to make personal contact with Democratic leaders in their localities, and demand support for Ellison.  "More of the same" no longer is a viable option.
Posted by the view from vicworld at 2:14 PM No comments: 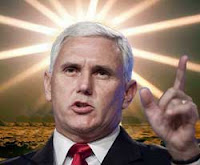 Tr*mp's moral compass points unerringly up his own ass, but he has Pence to show him the way.  Religious bigots are much too important a segment of the bigot population for any right wing demagogue to ignore.
Posted by the view from vicworld at 11:30 AM No comments: