If you take $400 per week away from the 20 million people most likely to spend it, businesses lose well over $30 billion in sales every month.  If you're trying to revive a cratering economy, that's really a pretty dumb idea — but that's the Republican proposal for "helping" the unemployed.

Granted, many of the unemployed currently are collecting more in unemployment benefits than they earned while they were working, which might make them hesitant to return to their crappy jobs – mostly "heroic" ones like cashier, busboy, and pedicurist.  Sorry – no extra pay for your added risk.  Many more will stay unemployed because their jobs have disappeared, and aren't coming back any time soon.

While some Republicans in Congress must see their $200 proposal as a starting point in a negotiation, the hard right would like to end the benefit entirely.  They play on the politics of resentment, which may be the defining feature of the Tr*mpian base: "Why should somebody else get something if I'm not getting it — especially those people?"  Needless to say, opponents of enhanced unemployment benefits will masquerade as "fiscal hawks," but one can't help but notice how their hawkishness waxes and wanes depending on who gets the money being spent.

Posted by the view from vicworld at 12:27 AM No comments:

The Twitter Hack
Smart enough to hack the accounts of  lot of famous people, including some leading Democrats, the hackers were not smart enough to run a profitable con, pulling in less that $120,000 from some very gullible people.  They may have done better had they hacked leading Republicans; Our President's account could have brought in millions.

Positive Thinking
The Tr*mp family attended Marble Collegiate Church when it was led by Norman Vincent Peale, author of The Power of Positive Thinking and a forerunner of today's Christian conservatives.  I suspect his influence on young Donald may have been profound, but, sadly, positive thinking hasn't worked on the coronavirus.

Posted by the view from vicworld at 1:22 AM No comments: 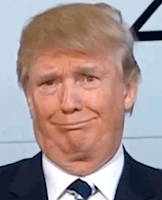 Posted by the view from vicworld at 9:55 AM No comments:


Now that the USofA finally has achieved some degree of consensus regarding just who won our Civil War, it certainly is time to remove all those monuments to the losers.  A big question, though, is just what to do with all that statuary that may be of some historical and/or artistic value.  Some want them relocated to private property, but all that would accomplish would be to create a network of private shrines to racism.  I have a better idea.

Let's create a new Losers National Monument on some suitably desolate expanse of desert land out West, where it will be possible to display them all together.  They would be removed from their pedestals and placed with each abutting the next, bearded cheek by mutton-chopped jowl and horse's ass by horse's ass – with just enough room for  intrepid visitors to squeeze between them for access to the statues that particularly pique their interests.   Better yet, the relocated statues could be arranged into a maze for added tourist appeal – a classic American roadside attraction.

Then, perhaps, we could turn our attention to that other monument to slavery, the United States Constitution — where concessions to slave states resulted in our profoundly non-representative Senate and Electoral College.  As that unrepentant racist Winston Churchhill once said, "democracy is the worst form of Government except for all those other forms that have been tried from time to time.…’

I'm not sure he got that right, but I don't have a better idea right now.

Posted by the view from vicworld at 2:46 AM No comments: