Nobody is surprised that Our President doesn't read his intelligence briefings, placing more confidence in Fox News than in the CIA.  (Personally, I suspect his aversion to reading may be because he's dyslexic.)  Republicans say nobody told him because the evidence for Russia paying bounties on the deaths of US service members wasn't strong enough.  Democrats say nobody wanted to tell him because he doesn't like to hear bad things about his buddy, Putin.

Another possibility is that he was told, and got on the phone to Putin to "find out if it was true."  Putin, of course, denied it — and Tr*mp, of course, believed him, just as he believed Putin's denial of Russian interference in the 2016 election: "President Putin says it's not Russia," Tr*mp proclaimed in Helsinki.  "I don't see any reason why it would be!"

Tr*mp has spoken to Putin by phone five or six times since he "didn't find out."  What were they talking about?  Oh, yeah — we're not allowed to know.

Posted by the view from vicworld at 11:34 PM No comments:

Everybody was surprised when Justice Neil Gorsuch voted to extend employment protection to gay and transgender individuals under the Civil Rights Act of 1964.  My first thought was, "Aw, that's really sweet!"  It was a choice that, to me, demonstrated his respect and affection for his mentor, retired Justice Anthony Kennedy.

News commentators have made much of Gorsuch's commitment to "textualism" – the idea that judges should interpret law according to its specific language rather than trying to descry the lawmakers' specific intent.  Textualists, though, are the Jesuits of jurisprudence: individuals expert in spinning eminently logical arguments in defense of foregone conclusions.  In Bostock v. Clayton County, Gorsuch demonstrated his mastery of the art.

The four decisions in support of LGBT rights written by Justice Kennedy are likely to be viewed by history as his most significant actions in his time on the Supreme Court.  While I'm certain Kennedy made no attempt to influence his former clerk's decision, I'm equally certain that preserving Kennedy's historic legacy was a powerful factor in shaping the younger man's thinking.

Posted by the view from vicworld at 3:00 PM No comments:


I had this funny feeling for a couple of days, and it took me that long to figure out what it was.  It had been quite a while since I'd experienced twinges of optimism.

That horrifying snuff film starring Derek Chauvin and George Floyd had set off what was beginning to look like a genuine mass movement.  Our President's psychopathy was becoming so evident that even a few Republicans were looking uncomfortable, and voices from the military offered some reassurance that our armed forces might not support a Tr*mpian coup d'etat.  I suppose that's cause for "hope," but the "change" part will be harder to come by. 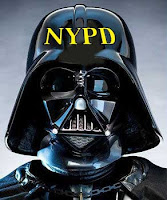 Structural racism is just one component of a larger structure: a social system that allows a small number of individuals to amass great wealth and power at the expense of everybody else.  For a sizable chunk of the white working class, white privilege is the only privilege available, and they are loathe to give it up.  Also, consigning people of color to an underclass makes it so much easier for the agents of our overlords – the police – to recognize just whom they're supposed to repress.  Restrictions that keep minorities geographically separate make the task of repression even simpler, and the show of force is far more important than the "control of crime."

Cop culture is macho, authoritarian, and insular.  I suspect it is held together primarily by shared privilege: everything from never getting traffic tickets to  "qualified immunity" for murder.    Maintaining that privilege demands intense loyalty to each other: hence, the "blue wall of silence."  Compounding that opacity, municipalities save money by conceding "free" items in negotiations with police unions, like periodic deletion of public complaint records, or contract language that keeps them secret.

I'm not encouraged by any of the "reform" or "defund" ideas making the rounds now.  None of them addresses the real problem: somebody has to be repressing the underclass to keep the elite in its very comfortable place.  Somebody has to ensure that the working class remains divided and at odds with itself.

Just the same, I keep getting this funny feeling . . .

Posted by the view from vicworld at 9:53 PM No comments: