• The bizarre stream of consciousness Our President delivered to the Boy Scouts this week makes the 25th Amendment seem more and more applicable.

• Tweeting the purge of transgender personnel from the military was both bizarre and absolutely vile — but maybe it's supposed to make up for the impending martyrdom of Jeff Sessions.

• Tr*mp will never find an AG the equal of Jeff Sessions, given that Adolf Eichmann was executed in 1962.

• If the Democrats' "Better Deal" had included single-payer heath care, somebody might have paid attention.

• Popular protest in Poland prompted a veto of "judiciary reform" by Andrzej Duda, demonstrating that marches still can accomplish something, somewhere.

• Sadly, it seems that "somewhere" does not include Turkey.

• We knew that playing football caused brain damage — now we need data on watching football.
Posted by the view from vicworld at 9:54 PM No comments:


Jerry Moran? Who's Jerry Moran? It wouldn't be very surprising if even Kansans couldn't come up with the name of their Senator — but it was Moran, along with Mike Lee, Susan Collins, and Rand Paul who spared their fellow Republicans the jeopardy of voting on so-called "repeal and replace."  Here's how the New York Times counted the votes:

The "no" group consists of the four named above plus the forty-eight Democrats.  We can be sure that the "no" Republicans were personally selected by Mitch McConnell -- discipline is tight.  Collins is the party's token moderate; Paul and Lee can claim ideological purity and avoid being "primaried" from the right; but what about Jerry Moran?

Moran gained some cover by "teaming up" with Lee in announcing his opposition, and it well could be that fellow Kansans Charles and David Koch (who bankroll primary challenges from the right) preapproved Moran's "defection."  Be that as it may, somebody had to save those thirty-four "unclear" and "concerned" Republicans from the political damage they would have suffered by voting for an extraordinarily unpopular bill.

It's interesting that the three Republicans selected to prevent consideration of a straight repeal, with no replacement, were all women.  As Republicans know, women are allowed to have "soft spots" — they can be forgiven a failure to be unfailingly "tough" on the poor.
Posted by the view from vicworld at 10:18 PM No comments:

Your best argument for Medicaid


The half of all Americans whose employers provide them with health insurance may be far too indifferent to Republican plans to demolish Medicaid. If they have parents, they should be paying more attention.

More than half the residents of nursing homes are supported by Medicaid, which assumes the costs after those residents have spent down their personal wealth. The average annual cost in the US is over $75,000 per year, so personal wealth tends to disappear quite rapidly. Not too far in the future, large numbers of baby boomers will need the level of care nursing homes provide.  What will their children do if Medicaid isn't available?

Essentially, they have three choices:

• Cover the costs themselves.  Ouch!
• Put mom in the spare bedroom, and tend to all her needs.  Eeek!
• Euthanasia.  (Don't get caught!)

When you put it that way, most people will understand why it's a good idea to get on the phone to their representatives in DC and raise a ruckus.  Spread the word, and do it now!
Posted by the view from vicworld at 11:21 AM No comments: 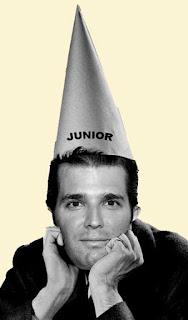 Don Jr., along with the other two stooges, Jared and Paul, didn't collude with the Kremlin when they met with with Russian lawyer Natalia Veselnitskaya — even though that certainly was their intent.  Had it been an FBI sting, they would have ended up guilty of something, but Veselnitskaya was not working for the FBI.  It also is very unlikely she was working for the Kremlin.

Based on her activities in the US over the past several years, it looks like Veselnitskaya is employed by some of the Russian businessmen hurt by sanctions under the Magnitsky Act of 2012, the sanctions that inspired Putin to "retaliate" by stopping adoptions of Russian children by Americans.  Pretty clearly, nobody in the Tr*mp campaign would have been interested in discussing the sanctions, so Veselnitskaya tried a bait-and-switch.  The campaign would be interested in some good dirt on Hillary, even if it came from the Russian government.

Junior and his pals were interested — but they were disappointed.

Just the same, those investigating Russian interference in the election are not going to get much mileage out of the new Confusions of Young Witless, Tr*mp's "high quality" son.  We've already seen all the "there" that's "there."
Posted by the view from vicworld at 2:59 PM No comments:

Judging by the explosions, there are a lot of patriots in my neighborhood.

Patriotism makes me nervous.  It seems to require a wholesale suspension of judgement, and a memory of history riddled with more holes than a speed limit sign in rural Texas. It is not, as Dr. Johnson said, "the last refuge of a scoundrel." Rather, it is a well-worn tool from the tool kit of every scoundrel engaged in politics.

There are those who maintain that patriotism somehow is different from nationalism, but they fail to explain just how it is different. Interestingly, no matter how different the nation-states or ruling elites that use it, the forms and functions of patriotism remain remarkably consistent.  Its imagery is militaristic, and so is its central demand: unquestioning allegiance to the State.

Patriotism is so closely related to and interwoven with religious fervor that the two often are indistinguishable. Every "just war" is jihad, every "fallen hero" a martyr.  Ideology displaces rationality; symbolism justifies devastation.

(It's gone quiet out there.  Is it still the American Century?  I guess we'll have to wait and see.)
Posted by the view from vicworld at 11:37 PM No comments: